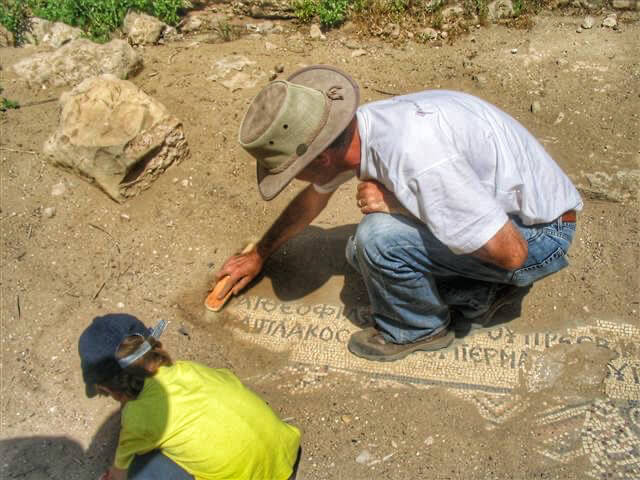 Khirbet Hanot is an archaeological site on the side of the main road from Beit Guvrin to Jerusalem. In the Byzantine period it was believed to mark the site where Goliath was buried.

The book of Samuel records the turbulent period of repeated clashes between the Philistines and the Israelites. Perhaps most famous, is the battle between David and Goliath. Taking place in the Ellah Valley, beneath Azekah, it ends with David beheading Goliath –

51 David ran and stood over him. He took hold of the Philistine’s sword and drew it from the sheath. After he killed him, he cut off his head with the sword. When the Philistines saw that their hero was dead, they turned and ran. 52 Then the men of Israel and Judah surged forward with a shout and pursued the Philistines to the entrance of Gath[f] and to the gates of Ekron. Their dead were strewn along the Shaaraim road to Gath and Ekron. 53 When the Israelites returned from chasing the Philistines, they plundered their camp. 54 David took the Philistine’s head and brought it to Jerusalem; he put the Philistine’s weapons in his own tent. (1 Sam. 17:51-54).

The Bible does not record the fate of Goliath’s Headless body. In the Byzantine period (4th to 7th century CE) Christians developed a tradition that Goliath’s body was buried along a road leading up to Jerusalem. Sixth century CE pilgrim Antoninus Martyr provides the most detailed account of this tradition –

As we were coming back to Jerusalem, and coming down on the road which goes to Gaza and Ashkelon, we kept on for 20 miles from Jerusalem and we came to Mount Gilboa, where David slaughtered Goliath (1 Sam 17). There Saul and Jonathan died (1 Sam 31-2 Sam 1). There also Goliath rests in the middle of the road, a wooden heap at his head. The pile of rocks forms a high hill, such that there is no movable stone for 20 miles since it is a holy custom that whenever anybody passes by, they pick up three stones and throw them at that mound. It never rains in those hills, and there is a mystery in the night-time hours: they see unclean spirits moving around; according to eyewitnesses, they are like fleecy clouds of wool, or perhaps sea waves.

Khirbet Hanot (Arabic: “Khirbet el-Khan”) is along the road descending from Jerusalem to the Judean southern lowlands. Excavations carried out at the site in the 1980s uncovered a Byzantine period chapel with a colorful mosaic floor. A stone tumulus next to the chapel seems to fit the big hip of stones described by Byzantine Period sources. Being so, it is quite possible that this is the site associated in the Byzantine period with the burial of Goliath.

The site is accessible from road 375. The Chapel’s mosaic floor is covered by sand for its protection. The stone tumulus (rujum in Arabic) is still waiting to be excavated. Perhaps a headless skeleton of a giant is indeed buried in it?

Hike along the Caesar’s Ascent 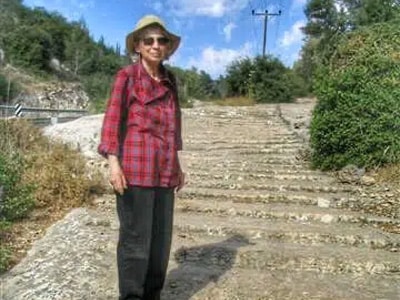 A marked trail from khirbet Hanot heading southwest traverses through a lush forest, parallel to the modern road.

It follows at some parts an ascent from Roman times. At two locations well preserved remains of stairs carved in the rock are still visible.

Formed in Roman Imperial times, the ascent is labeled as The Caesar’s Ascent.

A tour of Khirbet Hanot and a hike along the Caesar’s Ascent can be combined in a guided day tour in the Judean Foothills (the Shephelah).