Tel Miqne is a 50 acres size archaeological site in the Shephelah region, about 25 miles southeast of Tel-Aviv. Excavations at the site proved Tel Miqne is the ancient city of Ekron, one of the five main cities of the Philistines Pentapolis in Biblical times.

Along with Gaza, Ashdod, Ashkelon and Gath, Ekron was one of the five main Philistines cities who mastered the southern coastal plain in during the Iron age. Before the Ark of the Covenant was returned to the Philistines it was placed in a field neat Ekron for 7 months (1 Samuel 5). Later, after David slew Goliath, The Israelites chased the Philistines to the gates of Gath and Ekron (1 Samuel 17:52)

EKRON AND THE ARK OF THE COVENANT

The Book of Samuel records the turbulent period of the 11th century, when the Israelites were pressured by the Philistines. In one of the battles the Israelites even lost the Ark of the Covenant, yet later it inflicted a plaque among the Philistines. Eager to get rid of it, the Philistines in Ashdod sent the ark to people of Gath. But it inflicting a plague there as well, and so the people of Gath sent it to the Ekronites. Hearing of its dreadful acts the people of Ekron refused to let the Ark enter the city, and had it placed in a field near the city. Seven months later they completed a carriage that would take it back to the Israelites, at Beth Shemesh. The ark was eventually placed in Solomon’s Temple in Jerusalem, yet its whereabout remains a mystery to this day.

Later, the city was associated with the worship of Baalzebub (“Baal of the Flies”). Ahaziyah king of Israel, referred to its oracle when he got it ill, for which he was condemned by prophet Elijah (2 Kings 1). 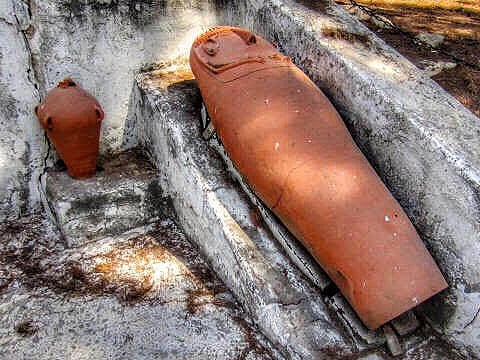 Nathan Edlin, member of the nearby Kibbutz Revadim, was the first to suggest locating at Tel Mikne (Arabic: Kirbet el-Muqanna’), with Biblical-era Ekron. Intense excavations were carried out at the site in the years 1981 to 1996, by a joint expedition of the Hebrew University and Albright Institute. They uncovered a wealth of finds from late Canaanite, Philistine, and Israelite Periods. Most significant was the discovery in 1996 of incriptions proving the site is ancient Ekron. The excavations indicated the site was first settled in the 13th century BCE by Canaanites, but from the 12th century it was inhabited by Philistines. In the 8th century BCE Ekron became and international center for olive oil production.  Over 100 olive presses were documented in and around Ekron. They produced about 700 tons of olive oils a year. At that time Ekron was the largest olive oil production center in the ancient Near East. But the city later declined, and in 604 BCE Ekron was conquered, and destroyed, by Nebuchadnezzar king of the Babylonians. The site was never settled again, and later even its location was forgotten. During the British mandate period there was a popular (yet false) assumption that the Arab village of ‘Aqir is preserving the name and location of ancient Ekron, about 10 miles north of Tel Miqne. The British established an airfield next to ‘Aqir and named it Ekron (Today’s Tel Nof IAF base). To this day, a town nearby is called Qiryat Ekron. 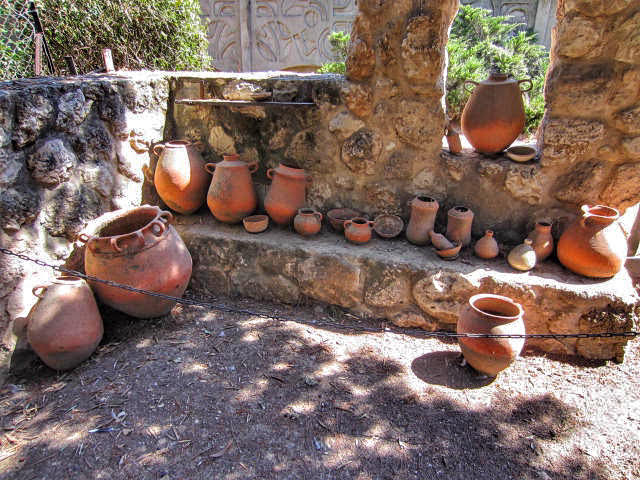 The site of Ekron / Tel Miqne is in the fields east of Kibbutz Revadim. Unfortunately, almost all the of the archaeological discoveries made at the site are covered up. However, kibbutz Revadim displays replicas of some of the finds made at the site (The “Philistine Street”), providing a glimpse to the rich past history of this area.

A tour of Ekron can be combined in a guided day tour in the Judean Foothills (the Shephelah).