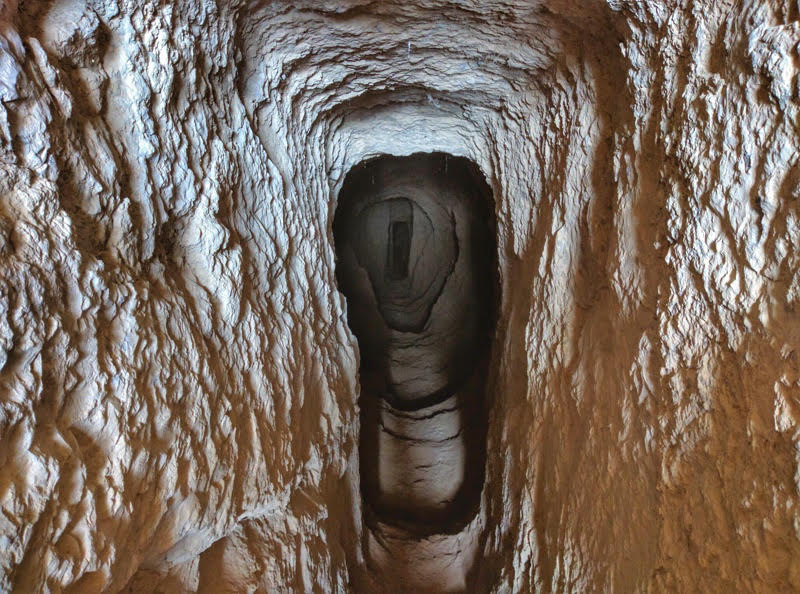 Set on a cliff, in the heart of the Judean Desert, Hyrcania was once a fortified palace, used by Hasmoneans and King Herod. To this day the site has not been excavated, but a reading of one of the Dead Sea Scrolls led to a surprising discovery in the valley beneath the site – Hyrcania’s Mysterious Tunnels.

The Discovery and Excavations of Hyrcania’s Mystery Tunnels

In 1952 a team of French archaeologists made a startling discovery in a cave about 1 mile north of Qumran – the Copper Scroll. The Copper Scroll listed 60 hiding locations of tons of gold and silver, and what seems to be Jerusalem’s temple treasures. To this day, the copper scroll is considered the most fascinating archaeological discovery ever made in the Holy Land. John Allegro, the first scholar to decipher and publish the Copper Scroll, surveyed and excavated at several sites in hope of unearthing one of these treasures. The first paragraph of the scroll describes the hidden treasure “In the ruin that is in the valley of Achor, under the steps, with the entrance at the east, a distance of forty cubits“. Allegro suggested that “Achor Valley” is today’s Hyrcania Valley, and that the term “ruin” is referring to Hyrcania itself, which was at times unmanned. Indeed, in 1960 he spotter not one by two tunnels at the foot of Hyrcania. He began digging one of them but gave up after digging for 30 meters.

About 25 years later a commercial pilot and adventurer named Bob Morgan heard about the tunnels and following Allegro’s directions he managed to track the tunnels. He arranged to meet with Allegro in an attempt to resume the excavation, but on the day of the meeting Allegro died of a heart attack, at the age of 65. Morgan secretly dug in the tunnels, but every winter flash floods filled the tunnels with debris. Finally, in 1999 he approached Oren Gutfeld, an archaeology PhD student from Hebrew University and told him of these tunnels. Oren arranged all the logistics, including air blowers and jackhammers, and they began digging the tunnels systematically. Unfortunately, the Second intifada broke out, and only in 2007 did Oren completed the excavation of the two tunnels. The eastern tunnel reached a depth of 53 meters, and the western tunnel proved to be 120 meters deep (!). Unfortunately, none of the tunnels yielded any significant finds.

The tunnels can be reached from the main road along Hyrcania’s valley, and a 2 mile long dirt road.

Contact us to inquire more about a private off-road tour to Hyrcania’s Mysterious Tunnels: