‘Izbet Sarta is a small yet significant archaeological site perched on a hill next modern-day city Rosh Ha’ayin. Dating to the early Iron age, some scholars suggested identifying it with Even Ha’ezer, a battle site from the time of prophet Samuel. 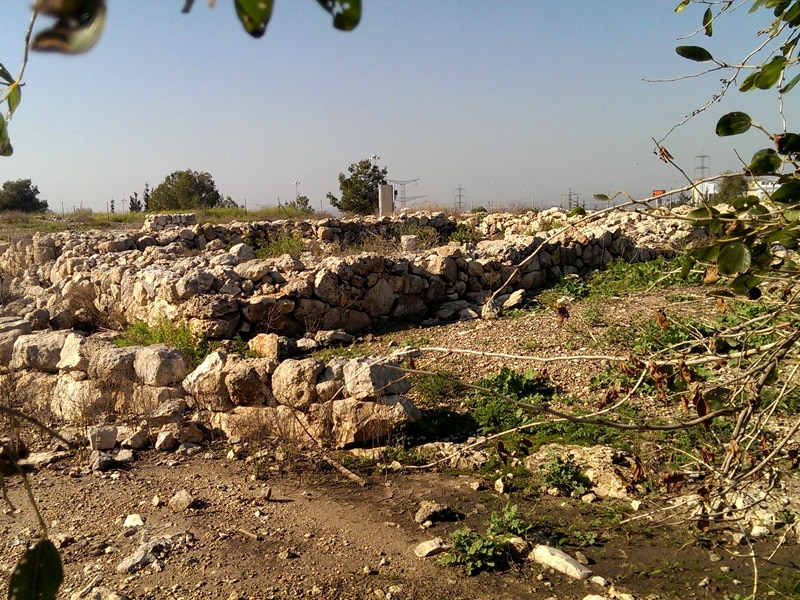 ‘Izbet Sartah was noticed by in an archaeological survey of the region and was excavated in the 1970s. The excavations indicated the site was settled for a relatively short period, and its material culture was typical to the early Israeli period (12th-9th century BCE). The archaeologists even found a very rare ostracon (inscribed pottery shard) that seems to be an writing exercise in the earliest form of Hebrew. This might be important testimony to development of literacy among the Israelites, reaching even rural settlements. The site fits well with the period of the Book of Judges, which records a gradual settlement of the Holy Land by the Israelites.

The fact the ‘Izbet Sartah is only 2 miles east of biblical Aphek-Antipatris led some scholars to suggest that ‘Izbet Sartah is Even Ha’ezer, where the Israelites gathered for two critical battles against the Philistines camping in Aphek (1 Samuel 4). On the first battle the Israelites were defeated, losing 4,000 man. Hearing of this, Eli, the priest and custodian of the ark of the covenant in Shiloh, suggested carrying the Ark to the battles site. Having God’s presence, he believed, would certainly lead the Israelites to victory. However, the Israelites were defeated again, and worse, the Philistines confiscated the Ark. Eli also lost his two sons in the battle –

“So the Philistines fought, and the Israelites were defeated and every man fled to his tent. The slaughter was very great; Israel lost thirty thousand foot-soldiers. The ark of God was captured, and Eli’s two sons, Hophni and Phinehas, died.” (1 Samuel 4:10-11).

Although ‘Izbet Sartah site was set as a farm, it is possible that it was used for gathering an Israelite army. Aphek, where the Philistines were camping, is on the other side of the valley, and can be well viewed from the site.

The site seems hidden, as it is behind an ordinary street in Rosh Ha’ayin, with no signs pointing to it. But it is a significant destination for any Biblical archaeology buff (like us 🙂 ), and a great place to read the story of the battle of Even Ha’ezer. From here the Ark was carried to several Philisitine cities yet inflicted a plaque whereever it was placed. Eventually it was returned to the Israelites at Beth-Shemesh, in the Shephelah.

A tour of the site can be combined with a guided day tour to Jaffa and Tel-Aviv. We also offer a themed tour around the wonderings of the Ark of the Covenant from here, to Beth-Shemesh.

Contact us to inquire more about a private tour to Izbet Sartah: