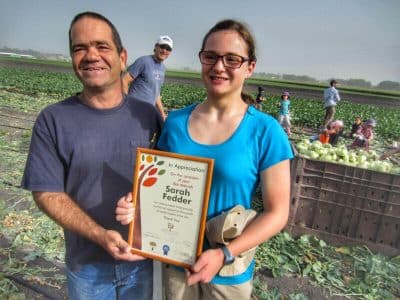 ‘Leket’ is an Israeli charity institution focused on food rescue (‘gleaning’) for people in need. It is based on the Biblical command that the ears of grain that falls from the reaper’s hand, during the harvest, must be left for the poor (Leviticus 19:9, Leviticus 23:22). The organization and its volunteers collect from fields, orchards and packing houses surplus slated by farmers for destruction. In addition, ‘Leket’ has two fields in northern Israel where volunteers grow and harvest annually 1500 tons of vegetable, all for people in need. ‘Leket’ also has agreements with some 300 food manufactures (hotels, cafeterias and army bases) of collecting surplus hot meals and prepared food, for those who can’t afford it. ‘Leket’ offers tourists the option of participating one of their activities, and especially in vegetable collecting in one of their fields.

Such a charitable and educational act is perfect for a Bar-Mitzva or Bat-Mitzvah tour in Israel.

Contact us to inquire more about a private tour to Israel: