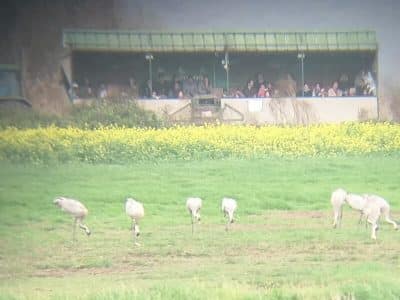 Located 25 miles north of Tiberias, the Hula Lake park (In Hebrew: ‘Agamon Ha-Hula’) is a successful environmental project of reintroducing the local wildlife of the region in a reflooded swamp area.

The park offers various outdoor activities in which visitors absorb the special natural beauty of the park and its surroundings.

The history of the Hula Valley

Humans settled around the marshland of the Hula Valley already in Prehistoric times. In biblical periods big cities like Dan and Hazor developed around the valley, yet the swamps limited further development. In the 1950s the malarial swamps were drained by the Zionist movement, making way for settlement and agricultural cultivation. Later, some of the swamps were reflooded to reintroduce the local wildlife, forming the Hula Nature Reserve. In the early 1990s another area was flooded by the heavy rains, and it was kept so, thus forming the Agamon Hahula. Covering an area of 247 acres, the park comprises a lake interspersed with islands rich in local flora and fauna, and especially flock of migratory birds. Due to its position along the major migration route of birds, the Hula Lake Park is a world class site for bird watching. Flocks of Pelicans, storks, cormorants and egrets stop here for a night rest, ‘refueling’ before flying on to their seasonal destination. In addition, the lake is home for many native birds, as well as amphibians, reptiles, and mammals. Even water buffalo graze in the meadows around the swamp.  Best proof of the project’s success was the 2011 announcement that the endemic Hula painted frog, thought to be extinct, was recorded again in the lake.

The Hula Lake Park is open every day of the week. The entrance fee is minimal (about $1.5) for local food supply. The reserve offers guided tours, rentals of golf carts, bicycles, quad cycles, and a ride on the ‘Mystery Wagon’ –  a camouflaged wagon drawn by a tractor, which passes right next to the birds.

A tour of Hula Lake Park can be combined with a day tour in the north.

Contact us to inquire more about a private tour to the Hula Lake Valley: