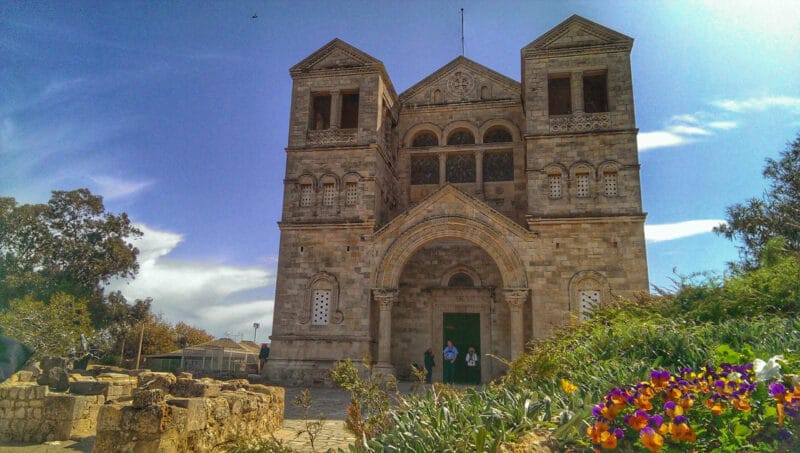 Mount Tabor is an impressive dome shaped mountain in the eastern lower Galilee. It rises 400m above its surroundings and is 562m above sea level. Mount Tabor is located not far from Nazareth, on the side of the main road leading from the coastal plain to the Sea of Galilee. Its unique shape captured the imagination of Biblical figures who attributed to the mountain qualities of power and beauty (Jeremiah 46:18; Psalms 89:13).

The book of Judges (4:6) records Deborah the prophetess summoning Barak, “The Lord, the God of Israel, commands you: ‘Go, take with you ten thousand men of Naphtali and Zebulun and lead the way to Mount Tabor.’” Barak led the Israelites to attack from Mount Tabor and vanquished Sisera and his chariots. In the 1st century CE Mount Tabor witnessed further military combats between the Jews and the Romans, but for most people what makes this mountain important is its identification as the place of the transfiguration of Jesus.

“About eight days after Jesus said this, he took Peter, John and James with him and went up onto a mountain to pray. As he was praying, the appearance of his face changed, and his clothes became as bright as a flash of lightning. Two men, Moses and Elijah, appeared in glorious splendor, talking with Jesus. They spoke about his departure, which he was about to bring to fulfillment at Jerusalem. Peter and his companions were very sleepy, but when they became fully awake, they saw his glory and the two men standing with him. As the men were leaving Jesus, Peter said to him, “Master, it is good for us to be here. Let us put up three shelters—one for you, one for Moses and one for Elijah.” (He did not know what he was saying.) While he was speaking, a cloud appeared and enveloped them, and they were afraid as they entered the cloud. A voice came from the cloud, saying, “This is my Son, whom I have chosen; listen to him.” When the voice had spoken, they found that Jesus was alone. The disciples kept this to themselves, and told no one at that time what they had seen.” (Luke 9:28-36)

Where Did the Transfiguration Happen?

During the Byzantine period (4th to 7th century CE) the mountaintop became an important pilgrimage site. Three churches were built on its pick and contemporary sources document 4300 rock-cut steps which led to the top. The strategic qualities of Mount Tabor were recognized by the Crusader knight Tancred, Prince of Galilee, who built a fortress on the summit in 1101 CE. Benedictine monks held the mountain until the collapse of the Crusader kingdom in 1187, and a deliberate destruction of the site took place in 1263, by the Mamluk Sultan Baybars. 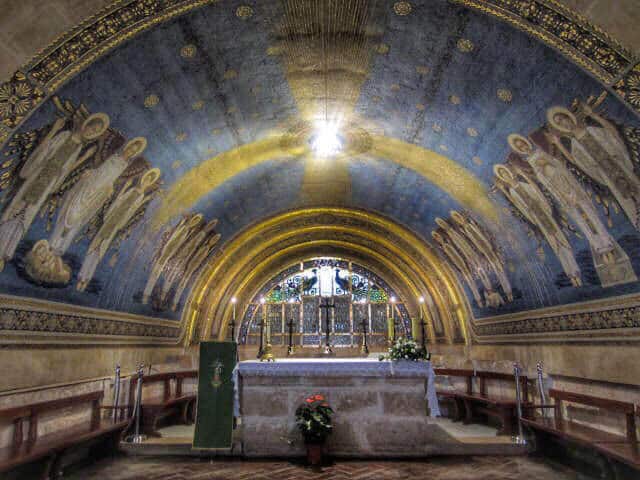 In 1873 Catholic friars re-inhabited the mountain, and subsequently an impressive Roman Catholic Church was built on the mountaintop, commemorating the transfiguration of Jesus. During the construction of the church, Byzantine and Crusaders architectural remains were recovered. Some of them can be seen next to the entrance to the modern church.  Don’t miss also the breathtaking views of the Galilee from a balcony at the southern side of the church. North-east of the Catholic monastic complex, a similar Greek-Orthodox complex was built in 1911. The Greek monks believe the courtyard of their monastery is the site where Peter suggested making three tents, for Jesus, Moses and Elijah. Furthermore, the cave in front of the church is by local tradition the site where Abraham met the king of Salem (Genesis 14:18-19).

Contact us to inquire more about a private tour Mount Tabor: