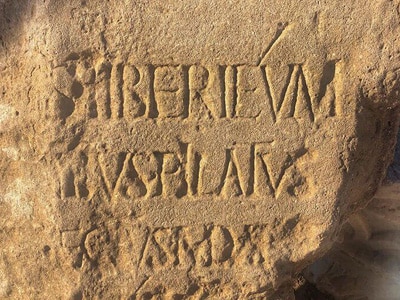 The “Pilate Stone” is an engraved stone, bearing the name of Pontius Pilate, the Perfect of Judaea in 26-36 CE. The stone was found in 1961 in secondary use as a step in the scalae (stairways) of Caesarea’s ancient theatre. The inscription suggests that the stone was originally placed at the entrance to a temple erected by Pilate, in honor of Emperor Tiberius. This discovery was significant in the Christian world as it was the first time the name Pilate, the judge of Jesus, was found in an inscription from his time. The stone is the only epigraphic evidence to this day to mention the judge of Jesus. The stone is on permanent display at the Israel Museum. Next to it are a few more significant discoveries from Israel that relate to Jesus, namely the bone box of Caiaphas, the high priest who interrogated Jesus, and the pierced foot of the crucified man from Jerusalem.