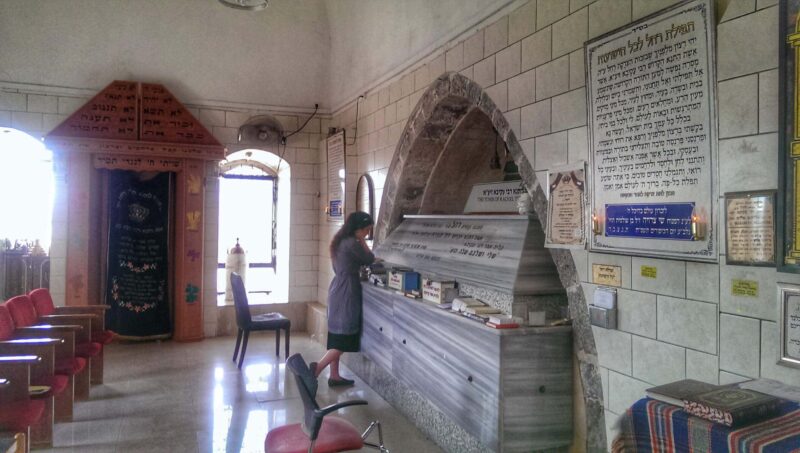 The tomb mark of Rachel in Tiberias (not to be mixed with the Rachel’s Tomb near Bethlehem, or the tomb of “Rachel the poetess” in Kinneret Cemetery), is revered by religious Jews as the burial place of Rachel, the wife of Rabbi Akiva.

Rachel was the daughter of the rich Jerusalemite, Kalbasavua, who fell in love with Akiva, a poor an uneducated shepherd of her father’s flocks. She was willing to marry him only if would go to school, but after the marriage he claimed to be too old to study. Rachel insisted, and at the age of 40, Akiva learned to read, with his young son.  24 year later he became a revered Rabbi but was known for is humbleness and repeated gratitude to his wife who persuaded him to study. Rabbi Akiva’s tomb mark is also in Tiberias

The burial site is known from the 13th century, but as the tomb of Sit Sukeina, the great granddaughter of Muhammad (tomb marks of Sit Sukeina are also known in Damascus and Medina). Rabbi Bassula, who visited Tiberias in 1522 was the first to suggest that Sit Sukeina’s tomb is (also) the tomb of Rachel, Rabbi Akiva’s wife. Today, it seems, only Religious Jews visit and venerate this site.

A tour to the tomb mark of Rachel, and Tiberias, can be combined with a guided day tour of the Galilee.