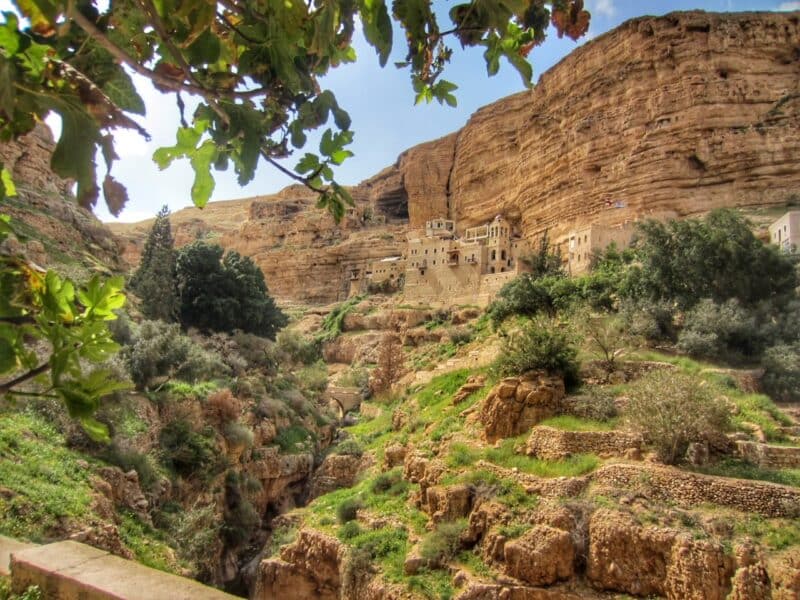 The Monastery of Saint George is a spectacular cliff-hanging complex in the northern Judean Desert. Set along the Prat stream (Wadi Qelt), its viewpoint offers breathtaking vistas of the Judean Desert, and a hike to the site is an exciting and unforgettable experience.

The monastery is a living example of the Christian monastic movement that flourished in Byzantine times, and especially in the Judean Desert. It was established in the 5th century by six monks, near the road leading from Jerusalem to Jericho, and Jesus’ baptism site. By local tradition, it was built over the cave where Elijah hid from Queen Jezebel and was fed by ravens (1 Kings 7). In the 6th century CE a monk from Cyprus named Georgius joined the monastery. He was so known for his strong faith and miraculous powers, that eventually the monastery was named after him. In 614 CE the monastery was attacked by Persians, who massacred all its 14 monks. It was rebuilt only centuries later, by the Crusaders, but once they were expelled it fell again into ruins. Only in the late 19th century the Greek-Orthodox church rebuilt the monastery, and it maintains it to this day.

Just a handful of Greek monks maintain the site today, who welcome visitors. By local tradition Saint Anne, Mary’s mother, resided in one of the caves of the monastery. Being so, Saint George Monastery is one of the few that allows women to visit its grounds. It is open every day from 9:00 to 13:00. A steep and winding path reaches the monastery from the closest parking lot. It is a beautiful 15 minutes hike each way. It is also possible hire a donkey for the ride back. If you do not plan to make this special excursion still you should not miss the viewpoint of the monastery! It is one of the most striking sights in the Holy Land.

A tour of Saint George Monastery can be combined in a guided day tour of the Dead Sea.

Contact us to inquire more about a private tour to Saint George Monastery: