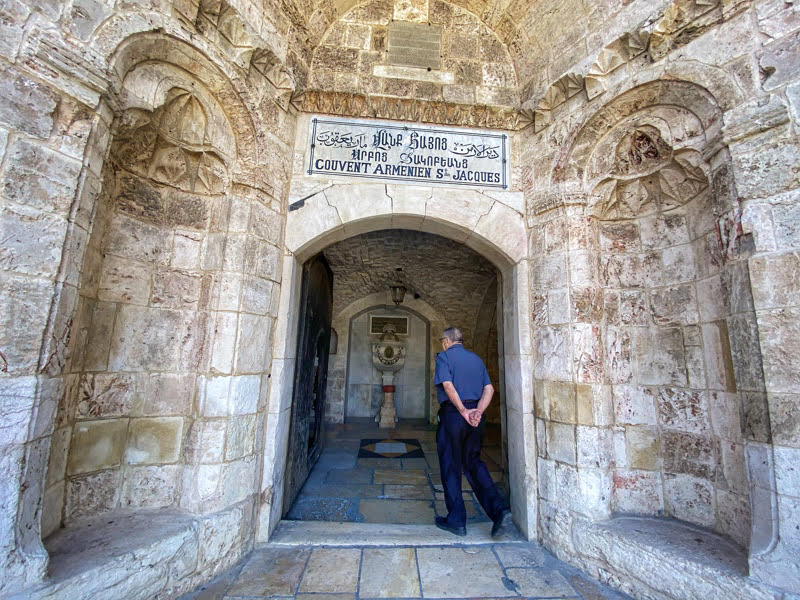 The Cathedral of Saint James is the main church in the Armenian Quarter of Jerusalem. By local tradition it holds relics of both Saint James “the Greater” (One of the twelve Apostles) and James “The Just” (The brother of Jesus).

Saint James Cathedral was most likely built by Queen Melisende. Melisende was the first-born child of Baldwin II, and the Armenian princess Morphie of Melitene. Failing to have a male heir, Baldwin raised her to inherit his kingship. As Queen Melisende sponsored several building projects. Saint James Cathedral was most likely one of them. It was designed in Romanesque style, with 4 massive pillars supporting its central dome. Built in the center of the Armenian Quarter, it eventually became the principal church of the Armenian Patriarchate of Jerusalem. It is especially known for having a relic of James, the brother of Jesus.

Saint James and His Relics

Saint James was the younger brother of Jesus, who led the early Christian community in Jerusalem. Yet, he was accused of heresy and stoned to death. By Catholic tradition his body was later carried to Spain and is kept to this day in Santiago de Ccompostela. The Armenians claim to obtain his head, and have it kept in a chapel inside their main church –  Saint James Cathedral. Another claim, made in 2002, argues that the original bone box (ossuary) of Saint James was found.

In 2002 popular archeological periodical, Biblical Archaeological Review, published a Jewish burial bone box (Ossuary) typical to the first century. On one of its sides the name of the deceased chiseled. It read, in Aramaic –  “James, Son of Joseph, brother of Jesus“.

All three names were common in the first century, but of the 6000 recorded ossuaries, only in one more burial box the name of the brother of the deceased mentioned. In most cases, if another family member of the deceased was mentioned, it was his father. And needless to say, all the figures mentioned in the bone box published by BAR were very known in the New Testament – Jesus, his brother James, and their father (foster-father by Christian faith), Joseph.

And why would James mention his brother? Perhaps because already in the 60’s he was the known Galilean sentenced to death, and three days later his tomb was found empty?

If this ossuary is genuine, it is the single most important Christian archaeological discovery ever made. The possibility that the actual bone box of one of the family members of Jesus of Nazareth was uncovered is indeed mind boggling.

But is it indeed so? Sadly, the bone box was not found in proper excavations. It was documented in the antiquities collection of an Israeli engineer and amateur archaeologist, Oded Golan. He claimed to have owned it for years, and never recognize its significance. Worse, later the bon box was broken, when returning from an exhibition in Canada. The state of Israel then confiscated the bon box and accused Mr. Golan of forging the inscription on the Ossuary. The trial took more then a decade, but it ended with the eviction of Mr. Golan. The state of Israel gave him back his ossuary, which is on display in his living room to this day.

The church is possibly the finest example of Medieval religious architecture in Jerusalem, but unfortunately it is open to the public for only 30 minutes every day, for daily procession. The interior is dimly lit and is decorated with colorful Armenian tiles.

To ensure visiting the church when it is open and combine it with other sites in the Old city, it is recommended to have a guided day tour of Jerusalem.