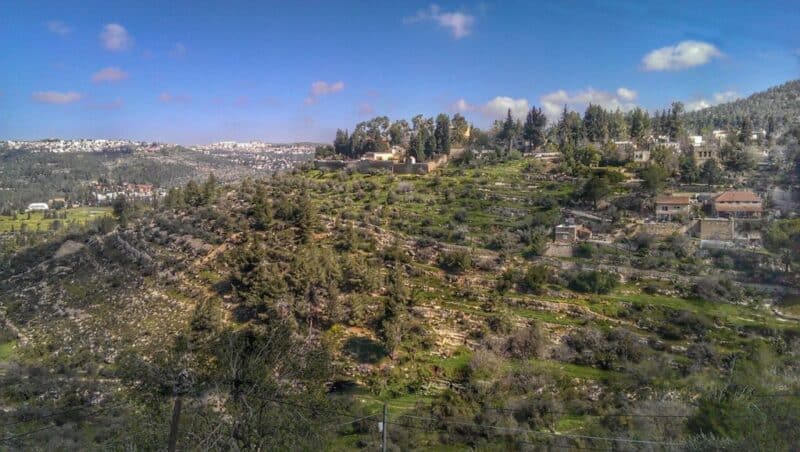 Ein Kerem (Hebrew for “spring of the vineyard” ) is a small pastoral village on the western outskirts of Jerusalem. Watered by a perennial spring, this green valley was cultivated as early as the Neolithic period (c. 6000 BCE). The village was inhabited in Biblical times, and Christian tradition it was the hometown of John the Baptist.

Ein-Kerem may be the same place as “Beth-Hakerem” (“The house of the vineyard”) mentioned several times in the Old Testament. Jeremiah states that fire signals were lit at Ein-Kerem during the Babylonian invasion (Jer. 6:1). Ein-Kerem is mentioned again in Nehemiah 3:14 after the return from the captivity in Babylon. But Ein-Kerem acquired far more fame because of events described in the New Testament.

According to Christian tradition, Ein-Kerem was the birthplace of John the Baptist, the forerunner of Jesus. Zachariah, the father of John, was a priest serving at the temple in Jerusalem. His wife,Elisheva (Elizabeth), was both childless and past the age of childbearing. An angel appeared to Zachariah while he was serving at the temple and promised him an heir, but Zachariah did not believe the prophecy, and as punishment, he was struck dumb. Shortly after, Elisheva did conceive, and when she was in her sixth month, Mary, her relative and future mother of Jesus, came to visit her.

Here, for the first time, the Scripture provides geographical marks: “At that time Mary got ready and hurried to a town in the hill country of Judea” (Luke 1:39). The Greek text defines Elisheva’s hometown as a “city” (polis), but in antiquity even a village was called a city. And since the city name is not mentioned, it could indicate that it was a small village. After John was born and Zachariah regained his speech, there is another geographical reference: “throughout the hill country of Judea people were talking about all these things” (Luke 1:65).

Based on the scriptures, the assumption is that John the Baptist grew in a (small?) village in the mountains of Judah. But the issue is not that simple. The chapter ends with a statement that “the child grew and became strong in spirit; and he lived in the desert until he appeared publicly to Israel” (Luke 1:80). Ein-Kerem is definitely not in the desert, and if he lived at home until he began his public work, then the location of the town should be sought on the eastern slopes of the Judean mountains, towards the Dead Sea, which is part of the Judean desert. Another possible explanation is that John was born in Ein-Kerem, but grew up at a different place, in the desert. The tradition that John was born and raised in Ein-Kerem is only about 1400 years old, but today it is the only tradition about the early years of John the Baptist. Theodosius, a Christian pilgrim in the 6th century was the first to mention a place 8km (5 miles) from Jerusalem, where “the holy Elizabeth, mother of John the Baptist, dwelt.” A Georgian prayer book from the 9th century is the first to mention the place by name – Ein-Kerem. 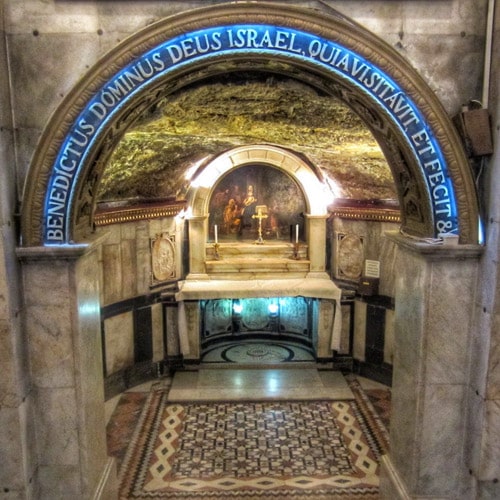 The traditional birthplace of John the Baptist is now a chapel within a church called John Baharim (Hebrew for “John in the Mountains”), in the center of Ein-kerem village. In the 1930s, S. Saller excavated church and its vicinity. He found late Roman and Byzantine period artifacts, and under them a few remains from the first century CE, including a flight of plastered steps recently  identified as part of a typical Jewish ritual bath (miqveh) for purification. Some have linked the discovery to Zachariah. As a priest in the temple, he probably had to purify himself every day, since his meals were often based on sacrifices brought by pilgrims. It is therefore possible that Zachariah had a miqveh in his own house. The archaeological find is therefore of major importance to substantiate the Christian tradition.

Another interesting archeological discovery was made in the courtyard in front of the church in 1939, when a British artillery unit camped in front of the church. The weight of one of the cannons formed a hole in the floor that proved to be an ancient cistern. Inside were fragments of a Roman period sculpture of Aphrodite and Adonis. These finds suggest that in the late Roman period a pagan family dwelt at the site. In the Crusader period (1099-1291) a church was built over the house believed to be the house of Zachariah. First mentioned by a Russian pilgrim Daniel in 1109, this church was one of the first to be built by the Crusaders.

Church of the Visitation 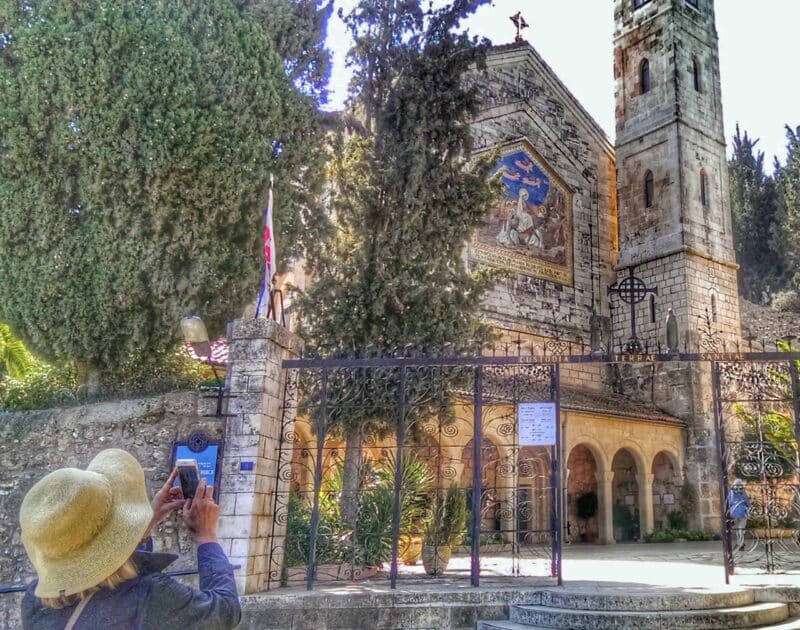 But Daniel mentions another Church in Ein-Kerem: “Half a mile away, on the other side of the valley, which is full of trees, is the mountain where Elizabeth ran away with her son. The rock where she hid is visible to this day. Above it a small church is built, and under it is a small cave, where there is another church”. Daniel describes a tradition mentioned for the first the in the apocryphal Gospel of James. In that source, shortly after the birth of John, the newborn and his mother had to hide, like Mary and baby Jesus, from the raging soldiers of the king Herod.

Although this tradition is unknown in the New Testament, it too became a popular pilgrimage destination, to such an extent that a rock was identified as the place where Elizabeth and John hid, and a shrine was built over it. The rock is preserved to this day in a church called The Church of the Visitation. The modern church is big and lavishly decorated. In the courtyard the benediction of Mary is written on glazed bricks in many languages: “My soul glorifies the Lord and my spirit rejoices in God my Saviour, for he has been mindful of the humble state of his servant. From now on all generations will call me blessed, for the Mighty One has done great things for me” (Luke 1:46-48). 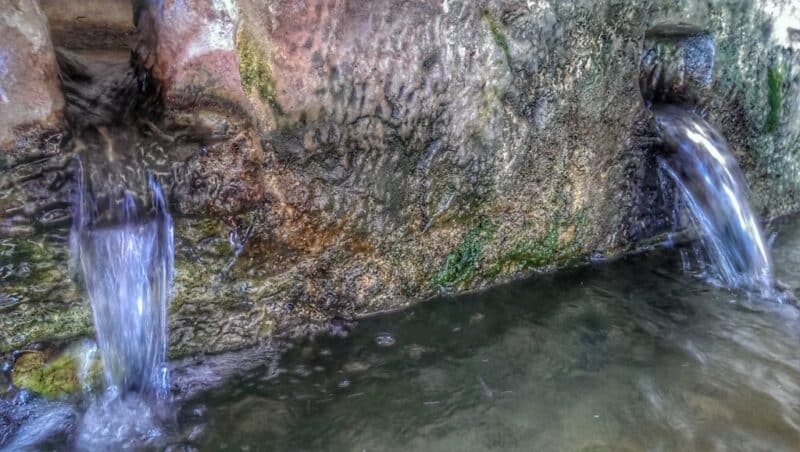 On the way to the “church of visitation”, the visitors pass by a spring called “The spring of Mary.” Local tradition argues that during her visit to Elizabeth, Mary drank from that spring, and so it is named “Mary’s spring”. In the 19th century the Muslims built above the spring a mosque commemorating Omar, conqueror of Israel andSyria, arguing he too drank from these waters.

Today Ein-Karem is a quaint village just outside of Jerusalem. It is a popular destination for locals as tourists alike. Christian Pilgrim group focus mostly on the churches and traditions that relate to Nativity of John the Baptist and the Visit of Mary.

Contact us to inquire more about a private tour to Ein Karem: