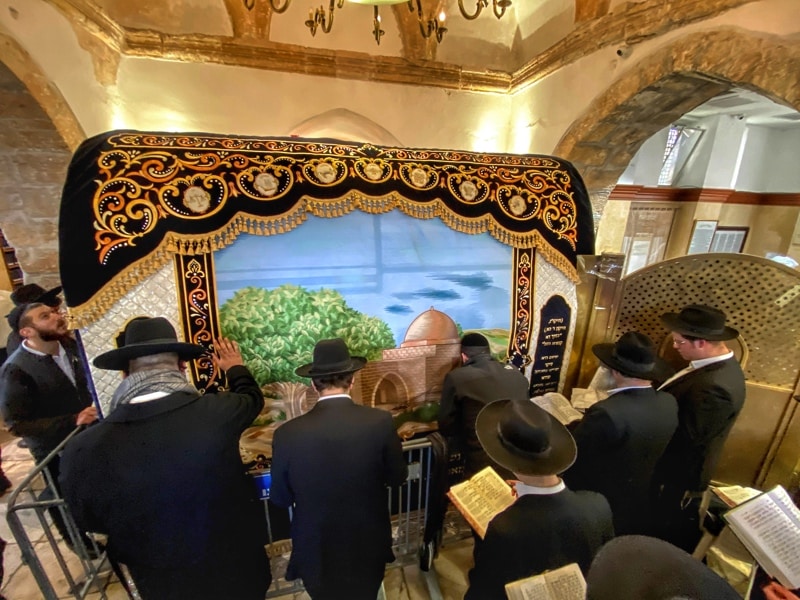 In line with the Biblical text, Rachel’s tomb is on the ancient road between Jerusalem and Bethlehem. “And Rachel died, and was buried on the way to Ephrath, which is Bethlehem. And Jacob set a pillar upon her grave: that is the pillar of Rachel’s grave unto this day.” (Genesis 35:19-20). 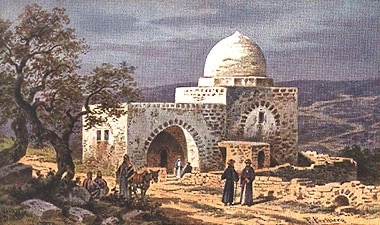 Rachel’s Tomb is revered from Roman times. Josephus repeats the Biblical account locating the tomb on the road to Bethlehem (Ant 1 343). The New Testament alludes to that location as well (Mat. 2 18). The Tomb is also mentioned in Byzantine period sources (Eusebius, St. Jerome, Madaba map, the Pilgrim of Bordeaux and Arculf). 12th century sources (Al-Idrsi and Benjamin of Tudela) are the first to report the tomb being domed. Ottoman period sources record the tomb being venerated by Jews, Muslims and Christians, although most of its visitors are Jews. In the 18th century the local Bedouins began burying their dead around the tomb, forming a Muslim cemetery. In the 19th century Jewish philanthropist Sir Moshe Montefiore sponsored a renovation of the tomb. The tomb was now a very popular Jewish pilgrimage destination, second only to the Western Wall. In 1948 the Jordanians overran the West Bank, and for 19 years Jews were denied access to the holy tomb. The tomb’s cenotaph was covered by the Waqf with an ornamental curtain bearing quotes from the Quran.

On the second day of the Six-Day War in 1967, Israel gained control over the tomb which again became a popular Jewish pilgrimage destination. In 1995, as part of the Oslo Agreements with the Palestinians, Israel intended to hand over the Tomb to the Palestinian Authority, yet after pressure from Jewish religious leaders it reversed this decision. Rachel’s Tomb remained under Israeli control, yet massive walls were installed around it to protect its Jewish pilgrims from Palestinian terrorism. Furthermore, in 2018 UNESCO declared the Rachel’s Tomb complex as a mosque, like its declaration in 2016 of the Western Wall as a holy Muslim site.

Rachel was Jacob’s first love, but on their wedding night her father, Laban, replaced her with her older sister, Leah. Jacob and Rachel waited 7 years to concecrate their marriege, but Rachel failed to concieve. She offered her maid, Bilhah, to Jacob, but later, surprisingly, Rachel conceived, and bore Joseph. She would conceive again, but died at childbirth, as the family was heading to Bethlehem. She was buried on the side of the road, and not in the family’s burial plot, the Tomb of the Patriarchs.

Although she only bore two of Jacob’s sons, Jeremiah later describes her mourning for all of Israel being exiled:

“A voice is heard in Ramah,
mourning and great weeping,
Rachel weeping for her children
and refusing to be comforted,
because they are no more.”

16 This is what the Lord says:

Rachel’s love of Jacob, her longing for children, and her tragic death at childbirth made Rachel both a tragic and heroic figure. It is no surprise that her Tomb became a popular pilgrimage destination for barren women and those seeking a match. 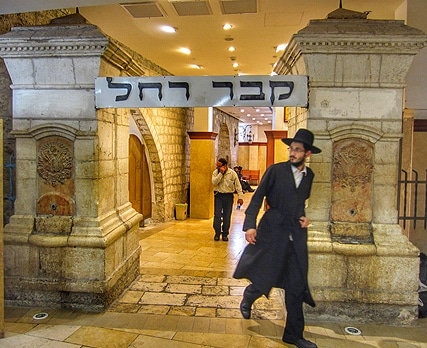 Due to its sensitive location, access to the Tomb is possible only through a secured road, about 1 mile long, between high cement walls. Still, the site is quite popular among religious Jews. A local Jewish tradition asserts that wearing a red string at the tomb is a charm for fertility. Some also collect stones from around the Tomb in belief it will ease labor on giving birth.

A tour to Rachel’s Tomb can be combined with a guided day tour of Jerusalem.

Contact us to inquire more about a private tour to Rachel’s Tomb: