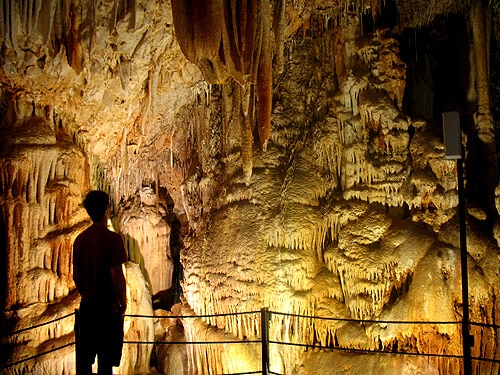 The Soreq cave, known also as Avshalom cave or Stalactites cave is fascinating discovery made by chance while blasting the mountain side of Jerusalem hills by a local quarry near Beth Shemesh. The controlled explosion uncovered the entry into a 300 feet long wonderland of stalactites and stalagmites.  After seven years and research and development a path was set through the cave and in 1975 it was opened to the public. The cave is unique for being rather small (250 by 200 feet), yet extremely rich in formations. A mix of “Macaroni” “Carrot” “pipe” and “Elephant Ears” stalactites are matched with pagoda-towers or ice-cream-cones shaped stalagmites beneath them. Some eventually join, forming decorated pillars or walls of different wild shapes. The cave is also called Avshalom cave, named after Avshalom Soham, a soldier in Sayeret Shaked who was severely injured in service and died after three years. His family and friends supported developing the cave to be open to the public.

The Stalactite cave / Soreq cave is a national park. It is open Sunday through Thursday from 8:00 to 16:00, and in the summer till 17:00. On Friday it closes and hour earlier. There are 150 stairs leading to the main entrance, and also quite a few inside the cave. Touring the Soreq cave is a great family experience, a magical insight to the creativity of mother nature.

A tour of Soreq Cave can be combined it with a guided day tour of Jerusalem or the Shephelah.