The Mosaics at the New Terminal of Ben Gurion Airport

Most visitors to Israel enter through Ben-Gurion Airport, near Tel-Aviv. The Airport was established during the British mandate Period, and was known as “Lod Airport” until 1973, when the name was changed to honor Israel’s first prime minister, David Ben-Gurion. Anticipating an unprecedented growth of tourism towards the year 2000, and especially of Christian pilgrim groups, in 1994 the Israel Airport Authority decided on the construction of a new Terminal. Aiming to complete it by the year 2000, the original title of the project was “Terminal 2000”.

But this deadline was not met due to higher than anticipated costs and a series of work stoppages in the wake of the bankruptcy of the main Turkish contractor. Eventually the Terminal was completed in 2004, and it was given the name “Terminal 3”. Since its opening the terminal won several awards for its design and service, and recently (March 2009) it won, again, the title “Best terminal in the Mediterranean”.

Wishing to adorn the terminal with some of the antiquities revealed through out the Holy Land, the Israel Airport Authority (“IAA”) contacted the Israel Antiquities Authority (also “IAA”..) and asked it to provide a few mosaic floors that would be displayed in the corridor of incoming flights. Three mosaics were chosen, from three different sites in Israel. They were all fixed into a special cement mold, and were delivered to the Airport where they were mounted just before the terminal was officially opened, in October 2004. 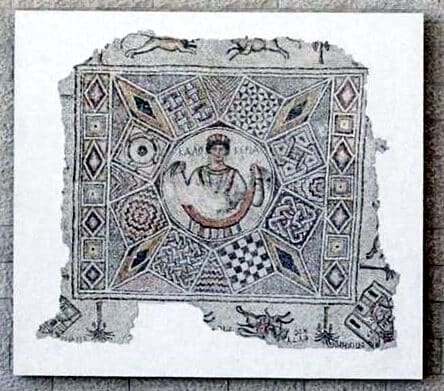 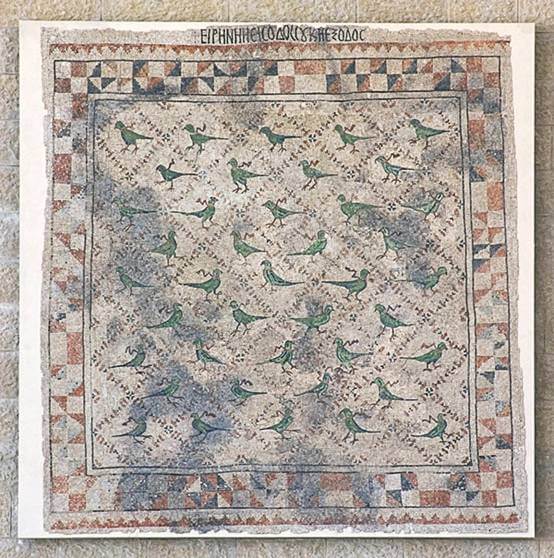 The square mosaic on the lower right side of the wall is from Caesarea Maritima, c. 50 km north of Tel-Aviv. It depicts in the center a woman holding a fruit of basket. Her Greek name, Kalokeria, is inscribed around the figure and suggests to the prosperity of Caesarea in the Roman and Byzantine periods.

The third mosaic was chosen mostly for its dimensions, to fit the space left on the side of the corridor’s wall. Yet in my view it turned out to be the most interesting one. It depicts a series of medallions, each encircling a bird, an animal, or a tree, and the frame is designed with repeating geometric patterns. It’s importance is not its contents, but rather its origin. This mosaic floor originally decorated the floor of a Byzantine period church discovered in “Beth Lehem in the Galilee”, c. 10 km east of Nazareth. When the church was revealed its excavator, senior archaeologist A. Oshri, proposed an intriguing hypothesis that the church was related to an ancient local tradition that Jesus was really born here, at Bethlehem in Galilee, rather then at Bethlehem in Judaea. His theory did not get much of scholarly attention, but it is an intriguing one.

So next time you enter Israel, make sure you appreciate its antiquities, even before showing your passport! 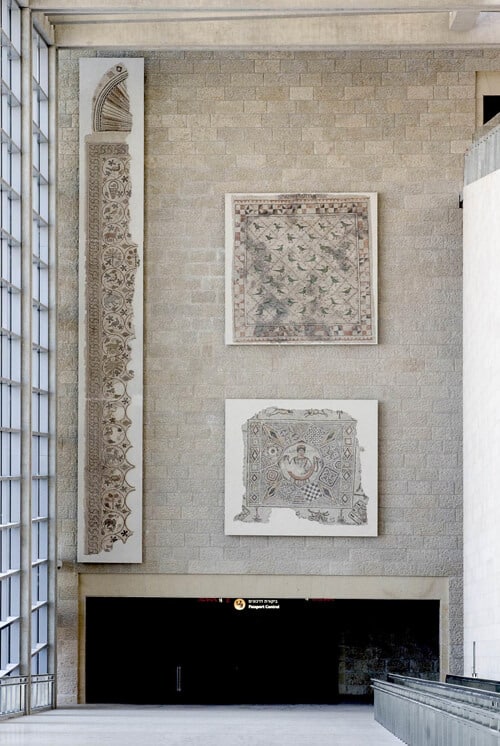