Home  >  Places to visit in Jerusalem   >  The Western Wall The Western Wall (called also “The Wailing Wall”) is considered as the most sacred site for the Jewish people in the world. Historically it is a remnant of the western retaining wall of the Temple Mount. Together with the other walls, it held the big size plaza where the Jewish Temple once stood. Being 2000 years old and relating to the Jewish Temple, the Western Wall is visited by thousands on daily basis.

History of the Western Wall

On the turn of the first Century CE Herod the great, king of Judea, had an ambitious plan. He wanted to rebuild the Jewish temple in a grand Scale. Indeed the new Temple complex would be the biggest shrine complex ever built in the Roman Empire. Sadly, the whole Temple Mount functioned for less then 2 decades. In the summer of year 70 CE it was destroyed by the Romans. Furthermore, since the Muslim conquest of Jerusalem in 638 CE it hold the Dome the Rock. By Muslim faith the Dome of the Rock is the third holiest site in the Muslim world.

Since the middle ages Jews visiting and living in Jerusalem referred to the remains of the retaining walls of the Temple Mount. They especially focused on the 70 meters long section of the Western retaining Wall. Until 1948 it was accessible only through a narrow alley. After the 1948 Jews were banned from the Old City. The Western Wall was deserted. Following the Six-Day War in 1967, all of Jerusalem was unified. Jewish presence at the Western Wall was fully resumed. 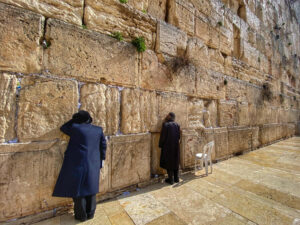 The Western Wall is open for all, 24/7, and is free of charge. It is quite a remarable experience to mix with the locals and feel the spirituality of the place when touching the stones. For many it will be an opportunity to fulfill a dream of putting a folded note between the stones. The big plaza set in front of the wall enables big public assemblies. Joining the crowds on special Jewish events in joyous singing and dancing at the Western Wall is quite am exhilirating experience. Occasionaly the state of Israel conducts military ceremonies and national events in front of the Western Wall as well.

The southern end of the Western Wall was uncovered in the 1970’s. It was part of a largescale excavation project to uncover the antiquities in front the Southern Wall. Called today “the Jerusalem Archaeological Park”, the site presents many finds that relate also to the history of the Western Wall. Within the park operates an innovative visitor center called Davidson Center. Being so, It is recommended to combine a visit to the Western Wall with a tour of the Southern Wall Archaeological Park and Davidson Center.

Bar-Mitzvah at the Western Wall 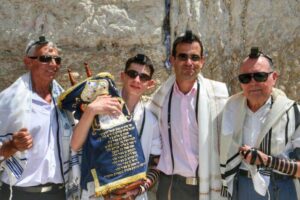 The Western Wall is also a popular destination for Bar-Mitzvah ceremonies. Every week, on Mondays and Thursdays, Israeli and overseas Jewish families gather at the Western Wall plaza to mark their joyful event. The ceremony is conducted by an Orthodox Rabbi or a representative of the Foundation. The peak of the event it when candies are thrown at the celebrating family after reading from the Torah.

Those who prefer to conduct the event in a less regulated way can do so at the southern end of the Western Wall. Called “Azrat Israel”, this specially designed platform with the Southern Wall Archaeological Park is a popular alternative for non-orthodox ceremonies that are still conducted in front of the Western Wall.

A tour of the Western wall can be combined with a guided day tour of Jerusalem.