The 9/11 Living Memorial Plaza in Jerusalem 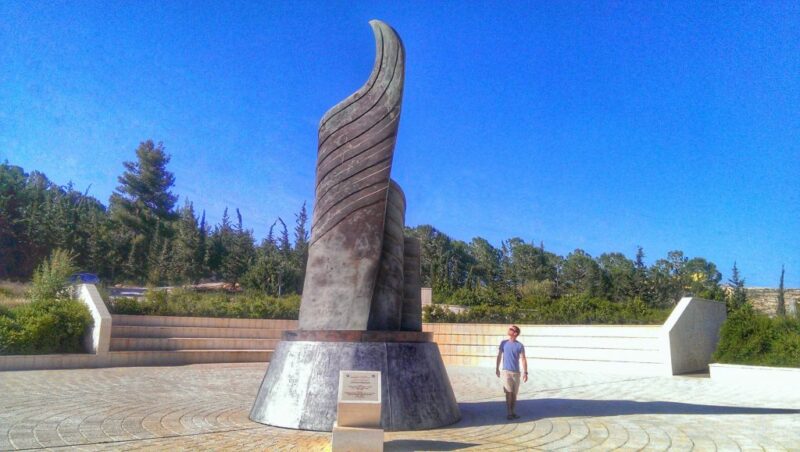 The 9/11 Living Memorial Plaza in Jerusalem is a monument formed by the State of Israel to commemorate the biggest terrorist attack in the history of the U.S. It is the only memorial outside the U.S. to list all the names of the nearly 3000 victims, which includes five Israelis. The central monument is a 30-foot-tall cenotaph, shaped as the American flag, fluttering upwards and transforming into a flame.

The sculpture is made of black metal and combines a shard from New-York’s Twin Towers in its base. Opened to the public in 2009, the 9/11 Memorial Plaza is set on a lush hill in opposite Jerusalem’s main road from Tel-Aviv. Locals and tourists reaching the city face a poignant reminder of radical Islam, terrorism, and the strong Israeli-American alliance in fighting it.

In 2018 a new plaque was added in the plaza, in memory of the 11 victims of the shooting in a synagogue in Pittsburgh, on the same year.

Although the plaza is opposite Israel’s busiest highway, road 1, only one winding paved road leads to it. It is a 10 minutes’ scenic drive from the northern end of Begin Boulevard, through the pastoral Arazim valley. Aside memorial, the site also offers stunning vistas of the outskirts of Jerusalem.