The Aharonson family house was the home of one of the leading families in old Zichron Ya’akov. During the First World War, it was also the center of NILI (ניל”י) underground, the first Zionist secret organization, which supported the British against the Ottomans. Today, their home is a museum, presenting  the family’s special history, and the legacy of the NILI underground. 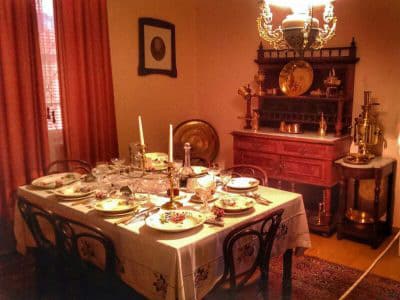 The Aharonsons were among the founders of Zichron Ya’akov, one the first Jewish Zionist settlements in the Land of Israel. Their oldest son, Aaron, was a known botanist and agronomist. He was, among others, the discoverer of the triticum dicocoides, the origin of domesticated wheat. Aaron Aharonson also established a spy ring to support the British in their fight against the Ottomans, who were oppressing the Jewish settlements in the Land of Israel. The underground code name was NILI, whose Hebrew name is an acronym for “Netzah Israel Lo Yishaker” –”The Eternity of (God) of Israel will not Lie” (I Samuel 15:29).

From 1915, NILI’s espionage provided the British intelligence data on the Ottomans their forces, as well as strategical roads and water sources. Indeed, two years later, in 1917, the British successfully expelled the Ottomans out of the Holy Land, establishing a British Mandate over the Holy Land. However, most of the NILI members did not live to see the fruits of their work. Most were captured by the Ottomans and executed during 1917. Most famous was the fate of Sarah Aharonson, Aaron’s sister. She committed suicide when arrested, in the family’s house. Since 1956, the Aharonson family house operates as a museum, devoted to the family’s special history and the legacy of NILI.

Aharonson House and Museum is open Sunday to Thursday, 9:00 to 17:00, Friday till 13:00. Guided tours combined with an audiovisual show present family’s house with most of its original furniture, and the history of the NILI underground and the tragic end for most of its members.

A tour of Aharonson Family House can be combined in a day tour of the north.

Contact us to inquire more about a private tour Aharonson House: