The City of David’s Canaanite Tunnel 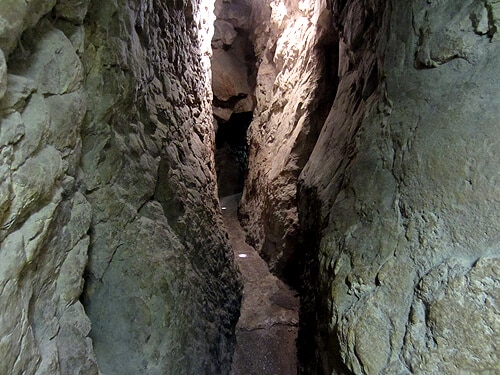 The Canaanite Tunnel is a name given to a tunnel running from the Gihon spring to the southern end of Biblical Jerusalem, ending at the  Pool of Siloam. Unlike its parallel Hezekiah’s tunnel, this tunnel has several outlets along its coarse, suggesting it irrigated agricultural plots in the Kidron valley. Being in a higher elevation then Hezekiah’s tunnel it is assumed that it preceded it.

Most scholars argue that it is from Canaanite times, parallel to the Middle Bronze Age.

The tunnel was documented through its whole length, but only it first half is open today to the public. It is accessed from the Gihon Spring, and is part of the City of David National park. At its end is a path leading to Areas D and E, the alleged King David’s Tomb, and the Pool of Siloam.