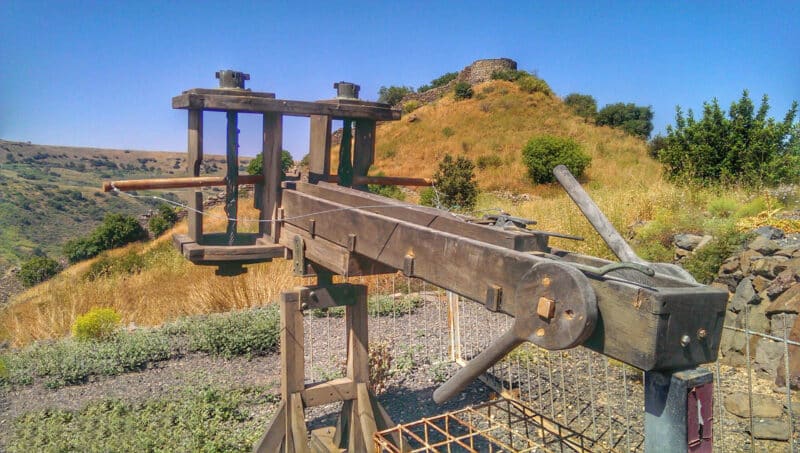 Perched on a camel hump shaped spur, overlooking the Sea of Galilee, Gamla (in Aramaic: Camel), is one of the most significant archaeological sites in Israel. Gamla was established by the Hasmoneans, but in 67 CE it was conquered and demolished by the Romans, and never to be settled again.

History and Archaeology of Gamla

Gamla was settled in the Hellenistic period, and unlike its neighboring city, Hippos, it had a clear Jewish character. When the Jewish big revolt broke out, the city was fortified, yet in 67 CE the Roman forces besieged the city, and eventually conquered it. The city was destroyed and never settled again. Eventually even its location was forgotten. Gamla was rediscovered only in 1968, after the Six Day War. Excavation of the site, led by archaeologist Shemaryahu Gutman, uncovered a wealth of finds, attesting to Gamla’s daily life, including one of the oldest synagogues in the world. They also found ample of evidence of the fierce attack and conquest of Gamla by the Romans.

How Come Gamla is Not As Famous as Masada?

Although dubbed as “Masada of the North”, Gamla is not as known as Masada. In reality, unlike in Masada, at Gamla the Jews did fight back against the Romans, and in Gamla some died when escaping the Romans, but non deliberately committed suicide. Yet Masada was rediscovered already in the 19th century and fully excavated in the 1960s. It’s remains also proved to be well preserved, and since 1970 a cable car brings visitors to its summit in comfort. But it seems that the controversial suicidal act of the refugees in Masada is what made it so known. Gamla, where the rebels did fight back, and nearly killed Vespesian, is ironically visited by far less compared to Masada. Yet if any site represents best Jewish heroism in the Roman period, it is Gamla.

Today, Gamla is a national park and a nature reserve. A short walk from the parking lot leads to a panoramic viewpoint of the site, the same spot where Vespesian and Titus plotted how to conquer the city. A steep and windy trail from the viewpoint leads to the site itself. But it is a strenuous hike that takes over an hour, each way. The viewpoint also provides great vistas of the Sea of Galilee, the Gamla waterfall, and nesting enclaves of Griffon vultures. Some 80 vultures nest in the cliffs around Gamla, enchanting the visitors when soaring overhead with their 10 feet spread wings. It is also possible to hike to Gamla Waterfall, the tallest waterfall in Israel (170 feet). The hike takes about 2 hours.

A tour of Gamla can be combined with multi-day tour in Israel that will include exploring the Golan Heights.

Bar-Mitzvah in the Ancient Synagogue of Gamla

Among the many finds made in Gamla, the archeologists uncovered a rare first century synagogue with a ritual bath (miqveh) near its entrance. Such a site can also be a very special location for a Bar/Bat-Mizvah ceremony. Setting the event in a synagogue from the time of the Temple, next to a battle site against the Romans, will make the event unforgettable. Reading from the Torah here, in Gamla, connects the Child’s festive moment so strongly to Judaism in antiquity in the Holy Land. The event can be combined with a visit to a Shofar workshop nearby (‘Kol Shofar‘), where the child can make his own Shofar from a Ram’s horn.

Contact us to inquire more about a private tour to Gamla: