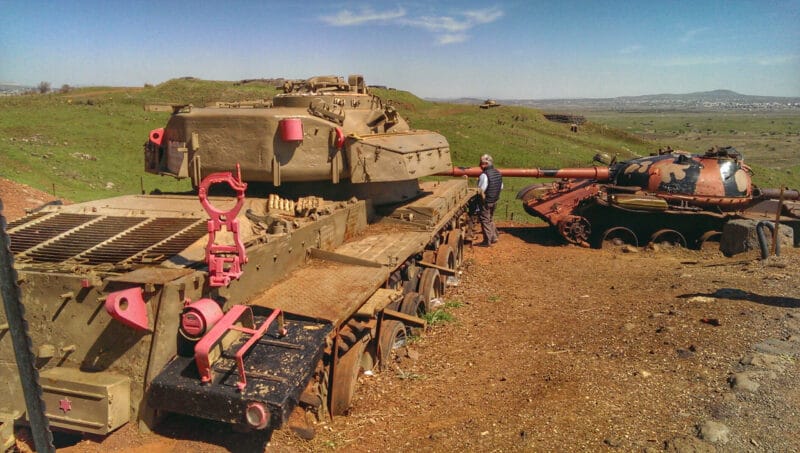 ‘Valley of Tears’ is the name given to a battle site in the northern Golan Heights. Here, at the outbreak of the 1973 Yom Kippur war, Israeli tank forces successfully held against a massive Syrian assault for continuous 4 days.

The ‘Valley of Tears’ Battle

The Yom Kippur war broke out towards the end of the holiday’s fast, on October 6, 1973, at 2:00 p.m. The Israeli intelligence failed to anticipate the assault, and so the forces on were depleted, also because of the holiday. Some of the soldiers even fasted. The 3 miles ‘Valley of Tears’, in the northern part of the Golan, is a relatively flat terrain, a preferred landscape for armored attack. Being so, the Syrian planned to make it one of the main penetration routes. The assault was accompanied by heavy artillery, but despite the surprise, the Israeli ground forces managed to hold out in the first hours. Even at night, despite the lack of night vision devices, Israeli forces managed to stop the progress of the Syrians. On the second day the Syrians condensed the armored forces and intensified the attack. Israeli reserve forces that arrived were sent to the southern sector of the Golan Heights, where the situation was worse. The Israeli depleted forces at the northern frontier kept fighting to prevent the Syrian army from advancing.  During the second night, the Syrians deployed anti-tank missiles. They hit some of the Israeli vessels but did not bring them surrender or retreat. On the third day, the Syrians made another effort to break through the Israeli lines. The Israeli forces were exhausted, some running out of ammunition. The assault began in the morning, accompanied again by heavy artillery shelling. In the heat of battle, the battalion commander ordered a retreat from the frontline positions, but later, shouting the command in the radio, he led the forces to re-occupy the positions and continue the fight. Shortly after, the Syrians retreat. On the fourth day all the Syrian forces retreated to the “Purple line”, leaving behind about 700 burnt tanks and armored vehicles.

The ‘Valley of Tears’ becomes a popular TV series

After ten years of production, in 2020 Israeli TV Channel 1 released a nerve racking 10 chapters series following events and battles in the Yom Kippur War. Its final episodes are devoted the battle at the ‘Valley of Tears’. Purchased by HBO max, ‘Valley of Tears’ is also its English name.

The battle took place in the plains east of Kibbutz El-Rom and road 98. On a hill 1 mile east of the kibbutz a memorial plaque presents the names of the Israeli fallen soldiers in the battle. Next to it is a British-made Israeli tank (“shot-Kal”), facing Russian-made Syrian T-55. A dramatic 20-minutes video presentation of the battle is available at Kibbutz El-Rom (OZ 77 movie). It echoes the courage and heroism of the unit to successfully stop the Syrian attack.

A tour of the ‘Valley of Tears’ battle site can be combined with multi-day tour in Israel that will include exploring the Golan Heights.

Contact us to inquire more about a private tour to the “Valley of Tears” Battle Site: