Tour to the Golan Heights

The Golan Heights is a green and rocky basaltic plateau east of the Sea of Galilee, at the far northern end of Israel.  Its unique and spectacular landscapes, historical sites and former battlefields, and various outdoor activities make it one of the most exciting regions to explore in Israel.

History of the Golan Heights

The Golan Heights were formed nearly a million years ago by volcanic eruptions. Its fertile soil attracted humans even in prehistoric times, whose many dolmens are spread across the region to this day. In the first century, Paul passed through the Golan Heights on his way to Damascus, an event that would change the history of Christianity, and to a great extent the whole world. The Golan Height flourished in the Roman and Byzantine periods, settled by Pagans, Christians, and Jews. Over 30 Byzantine-era synagogues found in the Golan Heights attest to the intense Jewish presence in the region in late antiquity. In 1967, following 19 years of Syrian repeated shelling of Israel, the IDF got a hold of most of the region. In 1973 the Syrians attempted to reclaim the region by an intense military surprise attack, but it failed. Israel controls most of the Golan Heights to this day.

Since Israel’s hold of this region, it witnessed unprecedented development, including in tourism. The region is rich in archaeological sites and some modern battlefields, as well as adventurous hikes, and even a ski resort. Furthermore, its agricultural produce, and especially its cattle farms and vineyards, provide perfect and excellent dinning combinations of meat and wine.

Below are the some of the best tour attractions in the Golan Heights: 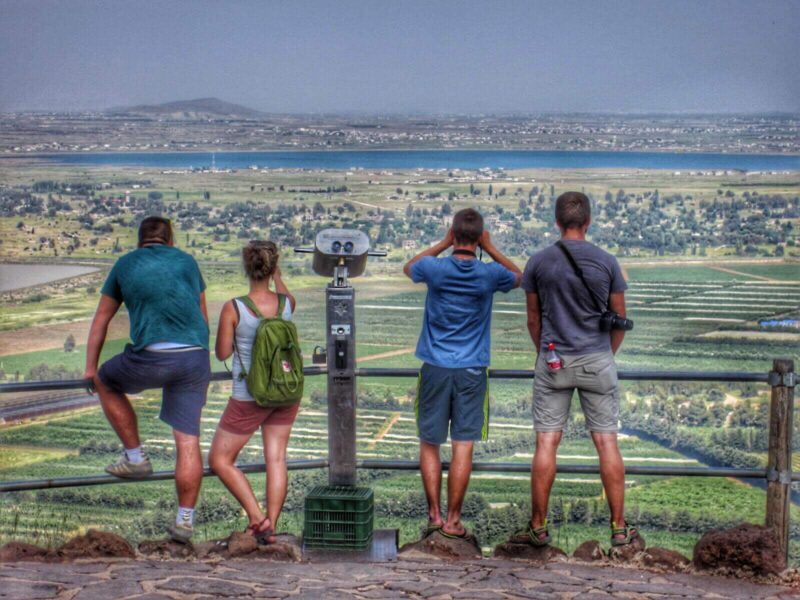 Mount Bental – A MUST for anyone touring the region. The former volcano now marks the 1974 ceasefire line with Syria. Its summit offers some truly stunning panoramas of the Golan Heights and the plains of Syria, and a unique opportunity to walk in trenches of an unmanned Israeli bunker. Kibbutz Merom Golan, established in the volcano’s caldera, operates a popular hotel and a good steak house (Habokrim). It also offers a horse ride around the caldera, and a fun and exciting ATV buggy tour next to the Syrian Border.

Off-Road Tour in the Golan Heights – A great way to explore the Golan Heights, off the beaten-track, is with a local expert. Driving through nature reserves and former battle fields, getting detailed explanations, and having lunch in a Druze home will be one of your memorable activities in Israel.

Gamla – The camel hump shaped archaeological site towering above the Sea of Galilee was once a thriving Jewish city. However, in the 68 CE, the Roman army besieged, conquered and demolished the site, killing over 5,000 Jews. Labeled as the ‘Masada of the North’, the dramatic and detailed account of the conquest by first century CE Jewish historian Josephus is matched by dreadful archaeological finds made at the site. Gamla lookout is also a popular place to scout for nesting enclaves of Griffon vultures, as well as the magnificent Gamla waterfall.

Umm el-Kanatir – A site on a spur overlooking the Sea of Galilee was once a prosperous Jewish village whose economy was based on the flax industry. Its fully restored ancient synagogue is the best example of Jewish public shrines in this region from Talmudic times.

Rujm el-Hiri – A mysterious prehistorical complex in the heart of the Golan Heights, that may have been a burial site set according to astronomical order. Reminiscent of the British Stonehenge, Rujm el-Hiri is accessible only by an off-road vehicle yet is well worth the effort.

Nimrod Fortress – Towering above Caesarea-Philipi, the impregnable Nimrod fortress was built by the Muslims to protect Damascus from a potential Crusaders attack. Today, its remarkable remains are a national park, providing the best example of post Crusaders architecture in the Holy Land.

Mount Hermon – At the highest and northern most point of Israel, Mount Hermon is a very popular ski resort in the winter months among Israelis, but is well worth a visit also in the summer. Asides the great diversity of plant life, on a clear day most of northern Israel and parts of Lebanon are visible from its top. No wonder that both Jewish and Muslim tradition place here God’s promise to Abraham (Genesis 15). Some also suggest that Jesus’ transfiguration (Luke 9) may have happened here as well.

Katsrin – Today’s main city of the Golan Heights is named after ancient Katzrin, whose remains were developed into a Talmud Themed village. The city is also home of a charming regional Archaeological Museum, but it’s most attractive part is in its industrial zone. Here, tourists are invited for a wine tour at the Golan Heights Winery, buying local Olive, or some beer tasting at Bazelet Hagolan brewery. In its second floor, the Golan Heights visitor center (‘Golan Magic’) presents an enchanting multi-sensory presentation of the region. Children will also have thrill joining a Chocolate workshop at De Karina Chocolatier, in a kibbutz nearby. If on a Bar-Mitzvah tour, the families are also invited to participate in a making a shofar in a local workshop (“Kol Shofar“).

‘Valley of Tears’ – The popular name given to one the most famous battle sites in the 1973 war, offers also an opportunity to climb on some of the tanks left at the site to this day. A video presentation of the battle, OZ 77 movie, is available in a nearby Kibbutz.

Sussita – The former Pagan city that prospered in Roman times, continued to thrive in Byzantine times, but declined under Muslim rule, and was finally abandoned after a devastating earthquake in 749 CE. Today, its rich remains are been uncovered by a joint Israeli-Polish-American expedition. Nearby. Jesus may have referred to the site in the Sermon on the Mount and probably performed the Miracle of the Swine nearby (Kursi).

Hikes in the Golan Heights

Among others, the Golan Heights offer popular hikes, and especially along water streams. Some can take a full day, require swimming, and even rappelling gear. These are some of the more family friendly popular hikes – 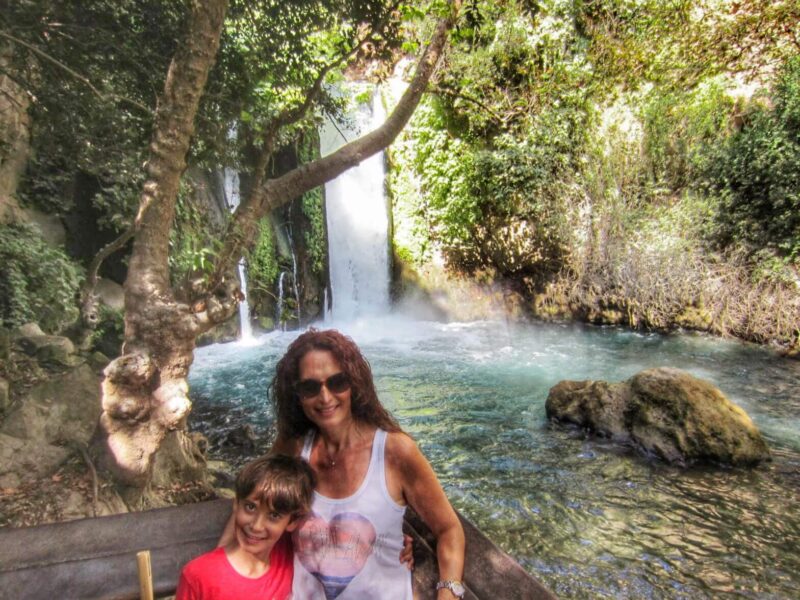 Banias Nature Reserve– A 2-3 hours hike from Caesarea-Philippi along the Banias stream, to the Banias water fall. Nature lovers will also appreciate the natural history museum at Kibbutz Dan (Beit Ussishkin). Behind the museum you can also climb on Syrian tank left where it was stopped in the 1967 war.

Nahal El-Al and Gilabun – A 3-4 hours hike in wet and fun streams of cold and fresh water in enchanting landscapes in the central Golan. Ideal for families and youth groups, especially in the summer.

Majarase – An Ideal hike for family with small children. Set along the end of the Daliot Stream, the shallow and slow flow of water through thick vegetation provides many wet and fun moments, for all ages.

Ayun Stream – A trail next to a set of waterfalls along the Ayyun stream became the first declared Nature Reserve in Israel. A local shuttle to the start point enables a comfortable and family-friendly 2 hours hike down by the streams, with some of the best vistas of Hulah valley.

Hula Lake Park – A must for all nature lovers. Part of the former Hulah swamp that was reflooded and successfully revived the local wildlife. In the spring and autumn visitors can enjoy the enchanting views of flocks of pelicans, storks, and flamingos landing for a night stop. Rental bikes and binoculars are available, as well as a guided tour in camouflaged cart driven by a tractor.

Points of Interest in the Hula Valley 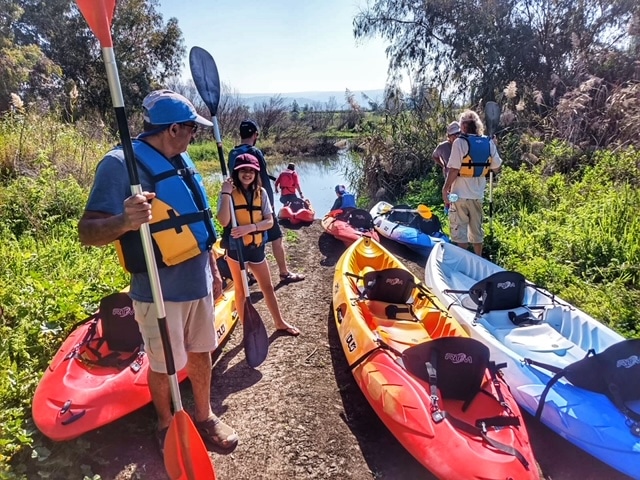 Caesarea Philippi (Banias) and  Tel Dan – These two big archaeological tells were once urban and strategical centers. Located at the sources of the Jordan river, both national parks are combined with a nature reserve which offer scenic hikes along the river’s gushing waters. Nearby, it is also possible to Kayak on the Jordan River in the summer season. For those fond of prehistory, don’t miss  Mayan Baruch Prehistoric Man Museum.

Tel Hai and 1997 Israeli Helicopter Disaster Memorial – On the turn of the 20th century a small group of pioneers at Tel-Hai were outnumbered by an Arab attack. Although defeated and all killed, their heroic fight became a symbol for the Zionist movement. Today Tel-Hai is a national park that presents the dramatic battle by an exciting computer-generated virtual show. Nearly a century later, two helicopters deploying Israeli soldiers along the Lebanese border crashed in the air. Their remarkable memorial is a stark reminder of the ongoing struggle Israel to maintain its borders safe.

Tel Hazor, and Chastellet – These two significant archaeological sites in the Hulah valley were settled in different time periods, but represents the significance of the region. Hazor, the biggest of all Canaanite cities, was burned by Joshua and later conquered by the Assyrians. Chastellet was formed by the Crusaders, yet was conquered and destroyed, on the same year it was completed, by Saladin. Aside the rich archaeological finds at borth sites, from Chastellet stretches a dirt road along the most picturesque and wild part of the Jordan River, ending at Bethsaida, near the Sea of Galilee.

A tour of the Golan Heights can be combined in multi-day tour of Israel.

“The Golan Heights is where I feel truly happy and free. Bathing in local springs, eating sweet and fresh cherries, climbing on tanks, or joining a dig, unfolding my heritage.”, team member, Edan Geva