Horvat Kanaf is a former Syrian village built over a Jewish village from the Byzantine period. It was first surveyed by L. Oliphant in the late 19th century and again (in the same year) by G. Shumacher. In the 1930s Prof. Sukenik from the Hebrew University documented in Kanaf Aramaic inscription thanking “Yose son of Halfu” for sponsoring a doorway. After the Six Day War the site was surveyed again. The Inscribed lintel was found in several fragments. It was restored and taken to the Golan Archaeological museum. 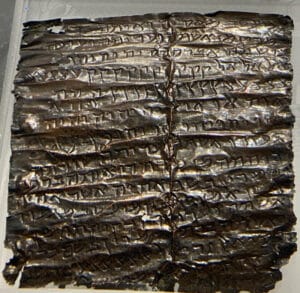 In 1978 Ur Zvi Maoz conducted excavations at the site. He found the foundations a Byzantine era synagogue, with several ornamented architectural elements. About 1000 coins deposited beneath the synagogues’ floor enabled dating its construction to the 6th century.

In a building near the synagogues two small, rolled copper amulets were found. They contained blessing for the healing of “the daughter of Marin” and “Elazar the son of Esther”. The scrolls are also on display at the Golan Archaeological Museum.

Horvat Kanaf is located on a hill overlooking the northern part of the Sea of Galilee. The Site can be reached by 4×4 from modern Kanaf or Ma’ale Gamla. Aside the remains of the ancient synagogue and the Syrian village, the site provides stunning vistas of the Sea of Galilee and its Surroundings.

A tour of Horvat Kanaf can be combined with multi-day tour in Israel that will include exploring the Golan Heights.