Hadrian’s Imperial Tour to the East

In Jewish history the emperor Hadrian plays a major role. Born in Italy in 76 AD, Publius Aelius Hadrianus was a relative of the Emperor Trajan, and as a Roman noble, he received a good education, entering the army as an officer. Besides his successful military campaign, he had a great passion for Greek culture. He knew Greek, and in 111 CE he was appointed as head (archon) of Athens.
With the death of Trajan at the Parthian frontier, Hadrian was proclaimed emperor by his troops. He initiated a major change in Roman foreign policy. The Roman militant imperialistic approach of perpetual expansion was replaced with a cultural expansion. Hadrian ordered the construction of various public buildings, religious and secular alike, to further embed Greco-Roman culture in all provinces.
Hadrian also traveled throughout his empire, taking a personal interest in the development of the provinces. He visited Britain, Gaul, Spain, Mauritania, the Balkans, Syria, Sicily, and north Africa.
In 130 CE Hadrian traveled the province of Iudaea and Arabia. Apparently during his visit to he announced the building of a pagan temple at the former Jewish Temple Mount and forbad Jews to practice their religion. This declaration provoked the Jews to rebel against the Romans. Led by Shimon Bar-Kosiba, the resulting war is known as the “Bar-Kokhba rebellion”. Although Bar-Kokhba won in some battles, the revolt ended with violent suppression by the Roman troops.

Triumphal Archae and Some Surprising Discoveries

There are several monuments and finds relating to Hadrian’s imperial tour to this region.

Hadrian ordered to erection of several triumphal arches, including in this region. On such arch stand intact to this day in Jerash (ancient Gerasa). Another stands in Jerusalem’s old city (Ecce homo Arch). 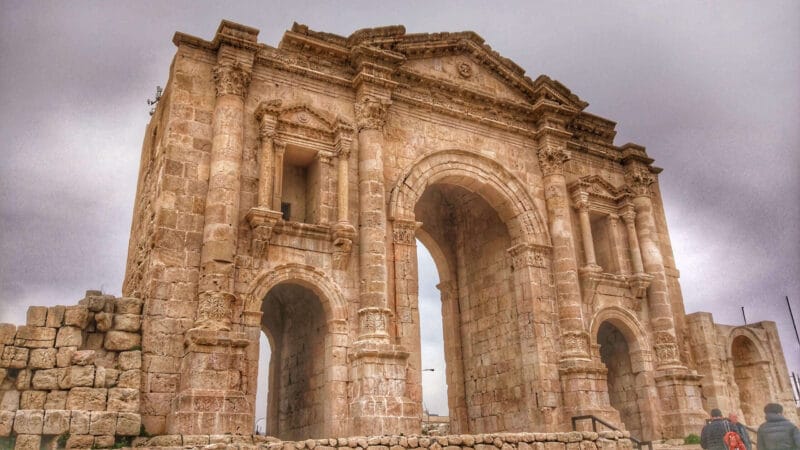 But perhaps the most direct and graphic find relating to Hadrian’s visit to Iudaea was found in the Jordan Valley. In 1975 a beautiful bronze head and bust of Hadrian was found by chance at Tel Shalem, 6 miles south of Beit-She’an. Nearby fragments of colossal size Latin inscription were found, suggesting a triumphal arch was once erected nearby. Both Items are on display today at the Israel Museum. Excavations conducted in 2019-2020 near Tel-Shalem found evidence of the Roman Military base. Being so, the Triumphal arch and Hadrian’s sculpture should probably be related to this camp. 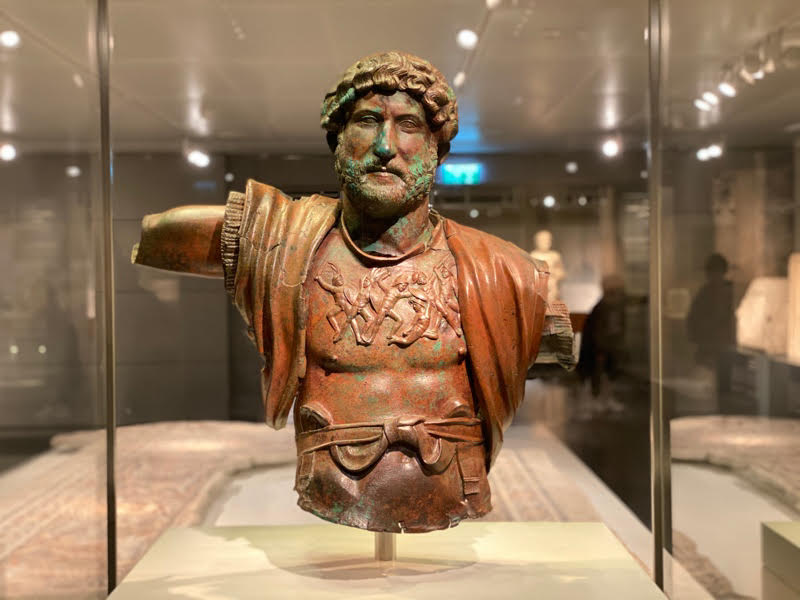 Contact Us for a tour to Tel Shalem and Jerusalem and see the sites mentioned in this article.