Hidden in the alleyways of Jerusalem’s Old city, the Church of the Holy Sepulchre is possibly the holiest site in Christendom. By a centuries’ old tradition, it marks the place of the crucifixion, burial and resurrection Jesus Christ. Venerated since the 4th century, the church is a fantastic mix of various artworks and architectural styles and split between 6 Christian denominations. Today, the site attracts millions, from all around the world, and is one of the most popular tour destinations in Israel.

History of the Site

The Site in the First Century

Having a typical shape of a first century Jewish tomb, the tomb of Jesus was undoubtfully part of a cemetery, north of the city. Archaeological evidence suggest it was next to an abandoned quarry, and that the hill of crucifixion (Golgotha) was a rock that cracked from quarrying activity. Jerusalem was destroyed by the Romans in 70 CE, and its early Christian community was dispersed, yet apparently the location of Jesus’ tomb was not forgotten.

In the late Roman period, the Tomb of Jesus was ignored. It was probably part of the city’s forum, and perhaps a Roman temple was built over it. Yet, in the early 4th century, the Empress Helena Augusta promoted Christian faith, and in 326 CE she visited Jerusalem. Taken by the Bishop of Jerusalem to the tomb of Jesus, she confirmed its authenticity. Later traditions argue she also found pieces of Jesus’ cross at the site. Within a decade, a colossal size church complex was built at the site, the church of the Holy Sepulchre.

The Church through the Byzantine and Crusaders Periods

The Church of the Holy Sepulchre was modified several times over the course of time. In the 11th the Muslims authorities attempted turning part of the church into a mosque. This was one of the reasons for the Crusades to the Holy Land. Breaching through the city walls in 1099 CE, the Crusaders massacred the Muslims of Jerusalem, as well as its small Jewish community. The church was found worn out, and so after establishing the Latin Kingdom of Jerusalem the crusaders renovated the church. Completed in 1149 CE the Crusaders gave the church much of its current shape, including its southern entrance.

The Church was renovated several times since, especially after the fire of 1808 and the 1927 earthquake. Today its maintenance is split between 6 different Christian denominations. 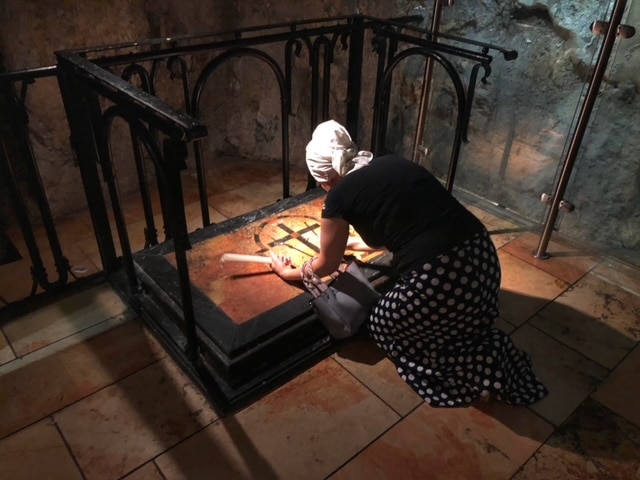 For many Christians, a visit to the Holy Sepulchre is the culmination of their pilgrimage to the Holy Land.  The lines to touch the Golgotha and to enter the Tomb of Jesus can be long, as the space inside them is very limited. Church is also known for its daily Processions, preserving centuries old liturgical traditions of different Christian communities.

Below are the main points of Interest in the Church:

The Hill of Crucifixion – Known in the Gospels as Skull hill (in Aramaic: Golgotha), the natural rock is on the right side of the main entrance. A steep staircase leads to a chapel against its top, where pilgrims line up to touch in an indented part of the rock. This indention is believed to be the spot where Jesus’ cross was placed.

The Tomb of Jesus –The small tomb, with only two chambers, is typical to Jewish burials in antiquity. It also fits Gospels’ descriptions of being a new tomb, with a burial niche on its right side (Mark 16:5). In high season the line to enter the tomb can take over an hour, yet many will go through the effort. Here, in this humble tomb, by Christian faith Jesus overcame death, truly proving his divinity.

The Stone of Unction – Set between the Golgotha and the Tomb, a big slab of stone is said to be where the body of Jesus was anointed and wrapped by linen before the burial (John 19:40). Some pilgrims wash scented oil of the slab with their veils, or put items on it, absorbing its sanctity to their personal belongings.

Chapel of the finding of the Cross – Set inside in an underground cave, the chapel is said to be where Empress Helena Augusta uncovered several fragments of Jesus Cross. Known as the “True Cross”, some fragments were sent to Rome, while some were kept in the Church. The Greek-Orthodox church of Jerusalem claims to obtain one of them to this day. It is kept in their room of relics, next to the Golgotha.

The Immovable Ladder – A peculiar anecdote, popular among local tour guides, is a wooden ladder placed above the main entry. It is said that the ladder cannot be moved because of the delicate relationship between the different Christian denominations. While insignificant by itself, it reflects the special politics over the maintenance of the Church.

A tour of the Church can be combined in a guided day tour of Jerusalem.