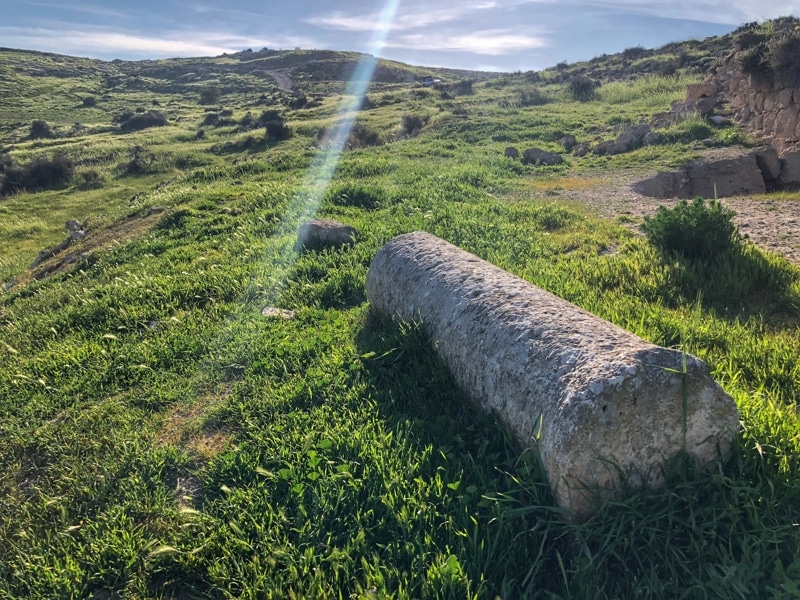 Khirbet Yattir is an archaeological site in the southern Judean hills, at the northern edge of the Negev desert. It is about 15 miles northeast of Beer-Sheva and next to the pre-1967 border (the Green Line). It was inhabited in different period, most remarkably in the Byzantine period, when it may have been settled by Judeo-Christians

History and Archaeology of Khirbet Yattir

Yattir is mentioned several times in the Bible. The book of Samuel records David sending spoils to Yattir, suggesting it was inhabited from the 10th century BCE. Following the Babylonian conquest of the Judea Yattir too was abandoned. It was re-settled only centuries later. Fourth Century CE Eusebius describes Yattir as a Christian village, and Madaba Map depicts Yattir as a small yet fortified village with two red roofed structures (churches?). Yattir’s location is preserved in the tomb of Sheikh el-‘Atiri, located in the site.

Spread over 10 acres, several areas in Khirbet Yattir were excavated in the 1990s. Most intriguing was the discovery of a church whose mosaic floor bore unique designs. Some scholars suggested that these decorations indicate the community was Judeo-Christians. If indeed so, this is the most important testimony for the material culture of the Judeo-Christians in late antiquity.

The Judeo-Christians and Their Material Culture

Christianity began as a Jewish religious movement in the First century CE. Yet unlike the rest of Judaism its followers believed Jesus is the fulfilment of Messianic prophecies from the Old Testament. Already in the mid-first century the Christians split from Judaism by abolishing key rituals like kosher food laws and circumcision. However, up the 5th century CE there is fragmentary evidence of the existence of a Jewish-Christian community living in the Holy Land. It continued to follow Jewish religious laws but adhered Jesus as Christ. The existence, character, and material culture of this community is subject to much research, yet is still quite obscure.

Khirbet Yattir nestles in the lush Yattir Forest. It can be accessed from road 316, but there are no paved roads reaching the site. It is open year-round and free of charge. Unfortunately, most of the archaeological discoveries made at the site are covered back, for their protection.  A nice compensation can be tasting some of the superb blends of Yatir Winery, whose visitor center is near Tel Arad.

A tour to Khirbet Yattir can be combined with a guided day tour to Tel Beer-Sheva, Beer-Sheva and Tel Arad.

Contact us to inquire more about a private tour to Khirbet Yattir: