General Allenby’s entry into Jerusalem’s old city in 1917 marked a new chapter in Jerusalem’s history. Under British mandate rule, the city witnessed an unprecedented development, and especially outside city walls. One of the most iconic buildings constructed at the time was a hotel that still holds the reputation as the most prestigious hotel in the Holy Land – the King David hotel.
The hotel was initiated by a Ezra Mosseri, a wealthy Egyptian Jew, in 1929. He purchased a 3 acre plot from the Greek Orthodox Church on a hill overlooking the western walls of the old city. Facing the Medieval complex known as the Tower of David it was called “King David Hotel”.
The main architect was Emil Watt, who designed a 6 floors plain yet elegant structure. More remarkable was its interior design, which combined quotes from Assyrian, Hittite, Phoenician, Muslim and Jewish art and architecture.
The hotel was opened in 1931, setting a new benchmark in local hospitality. The management was Swiss, the chefs were Italians, and the waitresses were from Sudan. The hotel quickly developed a high reputation and enjoyed prosperity.

The Hotel Leased by the British – and Blown Up

In 1936 the local Arabs began a set of riots, demonstrations, and terror attacks, both against Jews, and the British authorities. Tourism to the Holy Land declined, and the King David leased 2/3 of the building to The British mandate administration. A decade later, as the the Second World War ended, the authorities of the Nazis to the Jews became public. Yet the British continued their policy of limiting Jewish immigration to the Holy Land, as well as protecting themselves from Arab violence and terror.
In return, in July 1946 Ben-Gurion approved Begin and the “Irgun” to infiltrate 300 kg of explosives into the hotel’s kitchen, then at the base of it’s southern wing, disguised as a supply of milk jars. 3 times a warning was sent to the hotel’s front desk, yet the local commanders response was “I’m not going to take any orders from these damn Jews”. When the building blew up the whole southern wing collapsed, killing 91 people, including 19 Jews.
The British continued to use the unmanaged parts of the hotel until the termination of the British Mandate over Palestine, in May 1948.

The King David Hotel after 1948

During the 1948 war the hotel was used by the international committee of the Red Cross and as a refuge for people who lost their homes. It’s damaged wing was not repaired, and being right by the 1949 Jordanian-Israeli armistice line many of its rooms were actually facing Jordanian Military posts. Eventually Mosseri sold the Hotel to to the Dan hotel chain. The new management renovated the hotel and added two more floors, but only after the 1967 “Six-day War”, the new owners saw the fruits of their investment. 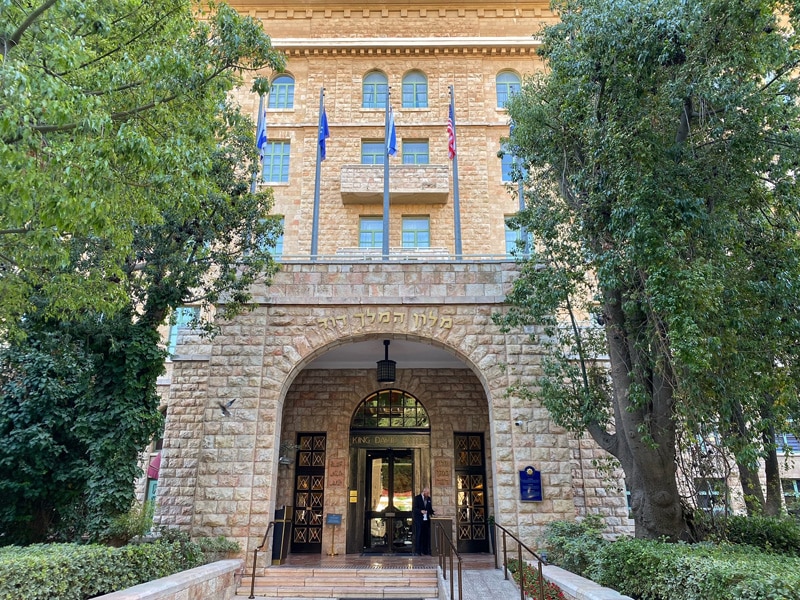 With the city being unified in 1967, the King David hotel returned to its original role as a prestigious hotel, which is maintained to this day. It hosted, and continues to host, leaders from all over the world, including all American presidents: Richard Nixon, Jimmy Carter, Gerald Ford, Bill Clinton, George W. Bush, Barack Obama, Donald Trump, and Joe Biden.
Today, the hotel conserves well it’s colonial luxury appeal, delivering luxurious elegance. Biblical style appliqués decorate its lobby, and a round balcony overlooks the pool and tennis courts. Along the lobby’s floor are names and signatures of some of the many known figures who stayed here.

Contact us for a tour of Jerusalem that will include a visit and review of the King David hotel.