Mamilla Pedestrian Mall is an upscale open-air mall next to Jerusalem’s Jaffa gate. It is known for its high-end shops, restaurants, and cafes, and its prime location between the old city and western Jerusalem.

Mamilla – An Aqueduct That Became a Mall 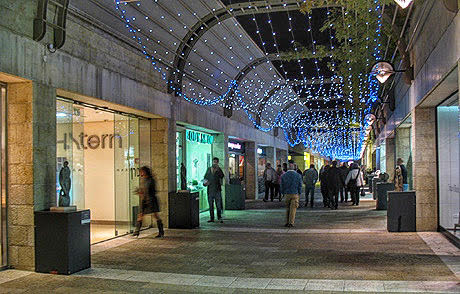 The mall is named after a water reservoir at its western end. Filled only by rain, the reservoir was nicknamed in Arabic – “May min Allah” – Water from God. Over time, the nickname was shortened to “Mamilla”, and it also referred to the aqueduct that delivered its water into the Old City. In the 19th century people started settling outside the old city’s walls, and eventually a street developed over the aqueduct. Carrying the name of the aqueduct (and the pool), Mamilla street was known for its shops, garages, and first car agencies in Palestine.

In 1948 Jerusalem was split between Israel and Jordan, and the border passed in the heart of Mamilla street. A big cement wall was built in the middle of the street, and on both sides, it was abandoned. Following the Six-Day War in 1967, the city was united again, now under Israeli rule. Despite its central location, only 60 years later the street was restored, and developed into an upscale open mall.

Today Mamilla street is a vibrant outdoor mall that connects the Old City with the new city. It is perhaps the most luxurious shopping center in Jerusalem, attracting large crowds on daily basis, locals and tourists alike. It is also a site of several historical monuments, including part of 194-1967 wall that once marked Jerusalem’s split between Israel and Jordan.

For a full appreciation of the site’s historical buildings it is recommended to combine it in a guided day tour of Jerusalem.