Facing the old city of Jerusalem at its southern end, Mount Zion is a small hill, but with great historical significance.

The word “Zion” referred to different terms in the past. In the Old Testament it was another name for Jerusalem, and during the Babylonian exile it became a metaphor for the promised land. In the New Testament Zion becomes a metaphor for a heavenly Jerusalem, God’s eternal city. Apparently in the Byzantine period Christians started labeling the Southern-Western hill of Jerusalem as “Mount Zion”. Perhaps it was the result of building the “Hagia Zion” on that mountain in the 4th century. Today there are no traces of that church. 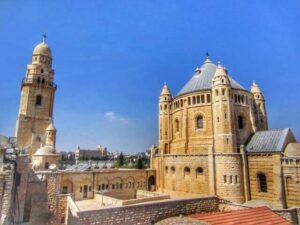 Mount Zion can be accessed by foot from the Old city through the Zion gate. In front of the gate is a big plot of the Armenian church. By Armenian tradition the plot contains also the house of Caiaphas, and where he interrogated Jesus. Unfortunately, the big Armenian church built at the site is still uncomplete and not opened to the public.

Behind it, a set of buildings represent quite a few significant holy events that may have happened on this mountain. The catholic Dormition Abbey, by local tradition, is at the spot where the Pentacosttook place, and where Mary, the mother of Jesus, fell to an eternal sleep. Near it, a Romansque style medieval building holds the Tomb Mark of King David. This is a popular pilgrimage destination for religious Jews. Interestingly, the second floor of the same building, by Christian tradition, is the site of Jesus’ “Last Supper”. Furthermore, on the rooftop of this building a single person welcomes visitors to receive a blessing at the President’s Room. The rooftop is also a great place for amazing panoramas of Mount Zion, the old City, and the Judean Desert. 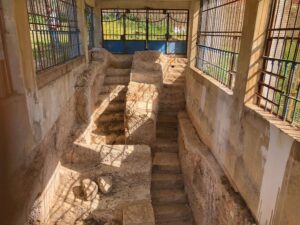 Mount Zion is also the site of the Chamber of the Holocaust, the first memorial of the holocaust built in Israel, in the 1950s. Some believe a plot in its southern end is the location of the  First Century Church.

On the eastern Slopes of Mount Zion the Catholic Church Petrus in Gallicantu argues to be at the site where Peter denied Jesus after he was captured. In the Cemetery near it, one tomb became quite famous thanks to Hollywood – Schindler’s grave.

Mount Zion is packed with sites and traditions that span a wide range of subjects. Being so, a tour of Mount Zion with a local guide is quite recommended.

The Pope Road to Mount Zion

In 1963 the Pope Paulus VI surprised the world on his desire to visit the Holy Land. Never before in papal history a pope cared to do so. Among others he requested to visit Mount Zion. A special road was paved to enable the Pope ride up to the mountain. This road is in use to this day.