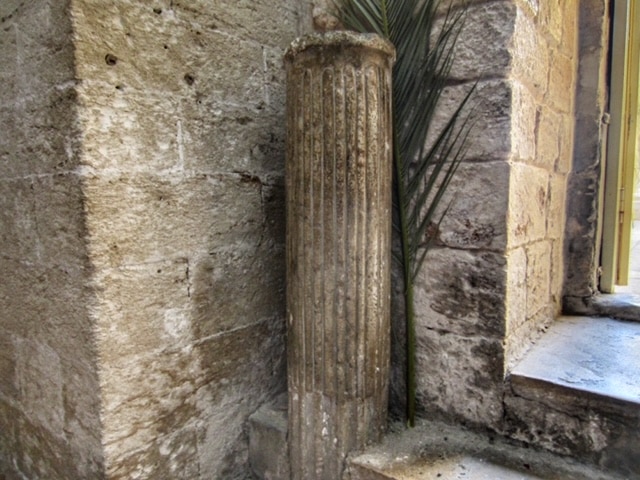 Hidden in the alleys of Nazareth’s old city, the Synagogue Church is believed to be over the synagogue where Jesus first proclaimed his messianic role (Luke 4:16-27).

Maintained by the Melkite Greek Catholics, the site bears interesting architecture and a mysterious marble pillar.

The New Testament records Jesus returning to Nazareth after his baptism, and on the Shabbath, he enters the local synagogue, and reads Isaiah 61: “The Spirit of the Lord is on me, because he has anointed me to preach good news to the poor. He has sent me to proclaim freedom for the prisoners and recovery of sight for the blind, to release the oppressed, to proclaim the year of the Lord’s favor.” (Luke 4:18-19) After the reading, he declares that he is the fulfillment of these prophecies, meaning he is the Messiah – “Then he rolled up the scroll, gave it back to the attendant and sat down. The eyes of everyone in the synagogue were fastened on him, and he began by saying to them, “Today this scripture is fulfilled in your hearing.” (20). However, the people of Nazareth rejected him, and wished to kill him. They dragged him to the edge of the city to push him off a cliff. “But he walked right through the crowd and went on his way.“ (30). Jesus left Nazareth, for good, and settled in the fishing village Capernaum, by the Sea of Galilee.

Centuries later, in the 6th century CE, a pilgrim from Piacenza, Italy, provided a lively review of visiting Jesus’ synagogue in Nazareth – “In the Synagogue there sits the book in which the Lord wrote his ABCs, and in this synagogue there is a bench on which he sat with other children. This table can be lifted and moved around by Christians, but the Jews are completely unable to move it, and it doesn’t allow them to drag it outside.” Today, the whereabouts of this bench are unknown. The Crusaders were apparently the first to build a church commemorating Nazareth’s Synagogue, hence also its peculiar name – “The Synagogue Church”. The church was later destroyed, but a stone structure marking the location of the first century synagogue in still intact. Its floor is 6 feet lower than street level, and its roof is arched, a typical element in medieval architecture. A raised bema in its northern end holds an altar. By local tradition, this is where Jesus read from Isaiah to the local congregation. A marble pillar next to its entrance is dated to the Roman period. This column is the only possible genuine remnant of the ancient synagogue. 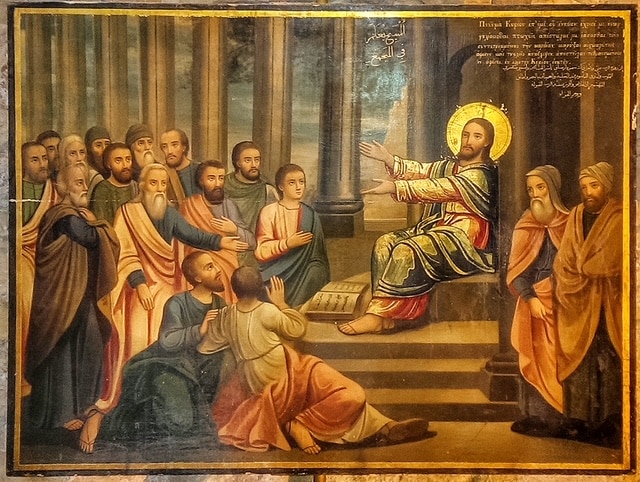 The Synagogue Church is visited by just a fraction of those coming see the Church of the Annunciation, perhaps because of its hidden location. The site is maintained by the Melkite Greek Catholics, who added an adjacent modern church. Completed in 1887, The New Synagogue Church walls are painted with images of Jesus’s life, from infancy to King. Both churched are open Mondays to Saturdays, and on Sundays in the afternoon.