Church of Annunciation in Nazareth 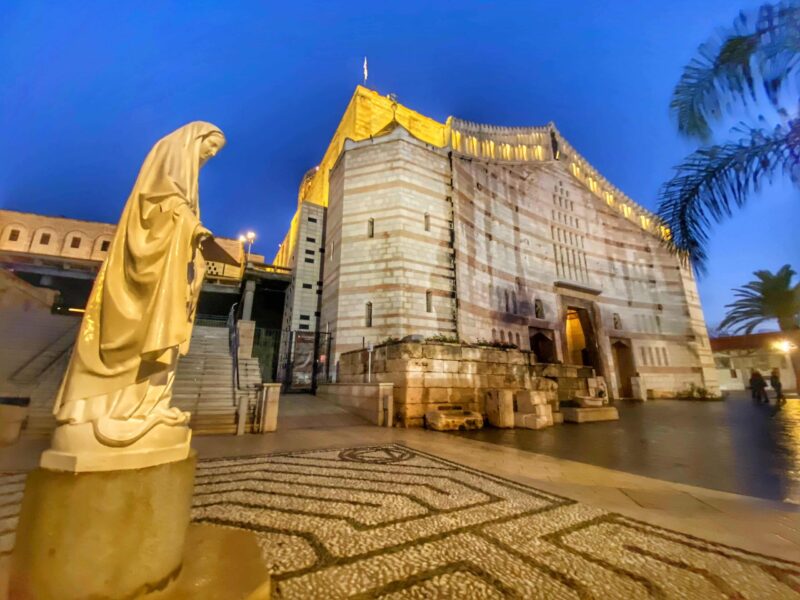 Located at the heart of old Nazareth, by a centuries’ old tradition the Church of Annunciation is built over the home of Virgin Mary, and where she became miraculously pregnant by the Holy Spirit. The site is one of the most significant Christian pilgrimage destinations in the Holy Land and is visited by thousands, on daily basis.

History and Archaeology of the Church of Annunciation

The Gospel of Luke provides the most detailed account of the Angel’s visit to Mary, announcing she will conceive Jesus:

“ In the sixth month of Elizabeth’s pregnancy, God sent the angel Gabriel to Nazareth, a town in Galilee, to a virgin pledged to be married to a man named Joseph, a descendant of David. The virgin’s name was Mary. The angel went to her and said, “Greetings, you who are highly favored! The Lord is with you.” (Luke 1:26-28)

The site marking the angel’s visit is venerated since the 4th century, and perhaps even earlier. The first church constructed next to the holy Grotto is probably from the early 5th century, as is bears images of crosses on its floor. Depicting crosses on church floors was banned in 427 CE. The church has a basilica shape and a single apse, facing east. A Greek inscription in the church’s floor indicates it was sponsored by a Deacon from Jerusalem named Konon. The church was rebuilt, on a grand scale by the Crusaders, but perhaps was never completed. Five of its capitals were hidden, perhaps because of the Crusaders’ defeat to the Muslims in 1187 CE near Tiberias (The Battle at the Horns of Hattin). Only in the mid-18th century the Muslim ruler Daher el-Omar granted the Franciscan a charter to build a church, but within 6 months. The result was a humble size baroque-style church, completed in 1730. It was enlarged a bit in 1877, but in 1955 it was decided to demolish the church for new one, matching better its significance in Christianity. Antonio Barluzzi, the chief architect of the Franciscans, drew a sketch of a new church. It would have a concentric design, and a high domed ceiling, echoing the Hagia Sofia. Surprisingly the Latin Patriarch of Jerusalem favoured the more traditional Basilica design, by Muzio. Barluzzi died in 1959, some say broken hearted for failing to design the new church of Annunciation.

The Church of Annunciation Today

Completed in 1969, the current church of Annunciation is said to be the biggest church in the Middle East. It is a powerful and monumental building, whose “Brutalist-eclectic” design reflects well the architectural trend of the mid-20th century, in both its architectural style, and some of art works. The top of its conic shaped dome echoes a lighthouse, symbolizing the light that directs the followers to safe grounds.

The courtyards and inner walls of the church are adorned with dozens of icons of Mary, in a variety of materials. These are gifts of Catholic communities from all around the globe, each reflecting the community’s local style and iconography. The lower level of the church bears various remains of the previous churches, all built around the holy grotto, the home-cave of Mary. These archaeological discoveries were made during extensive excavations carried out before the new church was built. The excavations also uncovered significant finds that possibly relate to the holy family’s home, and to early worship at the site, by Judeo-Christians. The most significant finds are:

A 1st century Ritual bath? – A rectangular installation found next to the 5th century church is believed by some to be a 1st century Jewish ritual bath (a miqveh). Being plastered and having steps leading into does imply that it held water. If indeed so, it is important testimony to the area been inhabited by Jews in Early Roman times. A similar installation was found under Saint Joseph Church. Today, both are visible in situ, where they were discovered.

“XE MARIA” Graffiti – A column base uncovered in a layer beneath the 5th century church, was found with a graffiti in Greek engraved on it reading XE MARIA – Heil, Mary. The Franciscans archaeologists suggest this is important testimony to a shrine built next to the cave also before the 5th century, by a Judeo-Christian community. A pilgrim visiting the shrine during the Roman period, engraved this graffiti on the column base. The inscribed column base and other artefacts found in the excavations are today on display in a museum adjacent to the church (The Terra Sancta Museum of Nazareth).

The second floor of the church bears in its apse one of the biggest mosaic walls in the world. It presents Jesus, Peter and Mary venerated by the Pope and the Catholic world. The inner side of the conic dome above resonates with the Lily flower, a symbol to Virgin Mary’s purity. 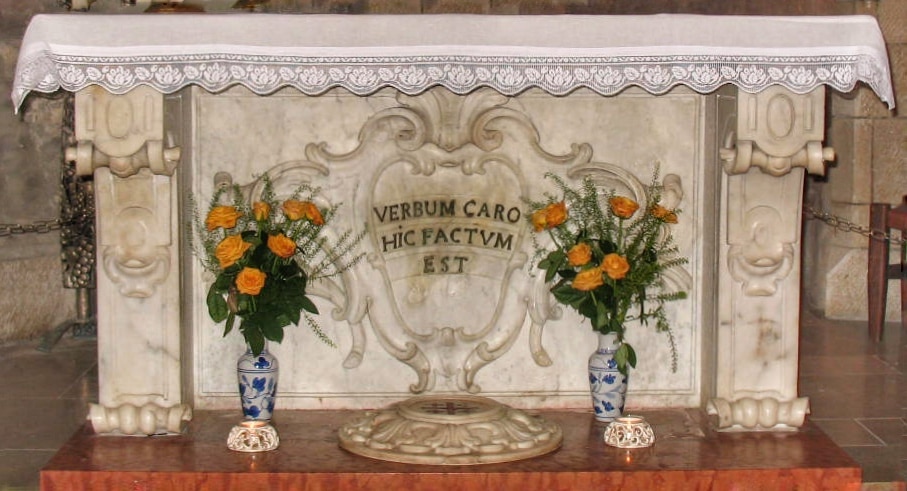 The focal point of all the shrines is the grotto identified with the home-cave of Mary. It is not opened to the public but can be viewed from the side. In its center stands an altar bearing a Latin inscription: VERBUM CARO HIC FACTVM EST – “Here the Word Became Flesh.”

Touring the Church of Annunciation

The church is open all days of the week, free of charge. Visitors are requested to dress modestly and speak softly. In high season you might expect a cue in front of the Holy Grotto.

A tour of the Church of Annunciation can be combined with a guided day tour of Nazareth and the Galilee.

Contact us to inquire more about a private tour of the Church of Annunciation in Nazareth: