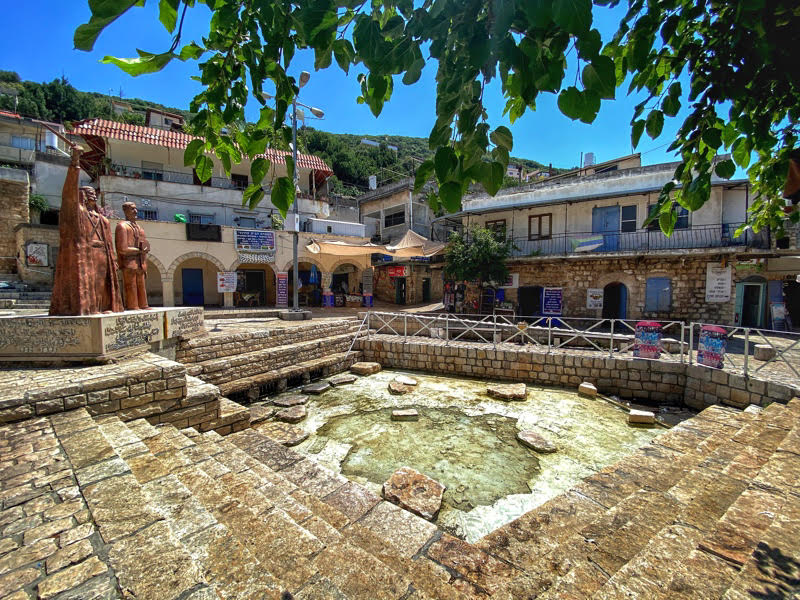 Peki’in (spelled also “Peqi’in”) is a small village in the upper Galilee, half-way between Akko and Safed. Although most of the village is inhabited by Druze, Peki’in is known for its small Jewish community and synagogue.

A Short History of Peki’in

Peki’in was settled already in Prehistoric times, but it is not known historically only from the first century and on. Historian Josephus mentions it as Beka, and by Jewish tradition two rabbis hid in a cave in Peki’in for 13 years in fear of the Romans. Under the name Bokehel, In the time of the Crusaders Peki’in was property of the one of the lords of Akko, and later of the Teutonic knights. It was around that time that Druze settled in the Peki’in as well. Ottoman era tax records are the first to attest to Jewish presence in the Pek’in, as well as Muslims and Christians. In 1936 the Jews of Peki’in were forced to leave the village. Later only one Jewish women, Miss Margalit Zinati, returned to the village.  To this day she is the single Jews still living in Peki’in, maintaining its synagogue and welcoming visitors.

Reaching the heart of the old Peki’in is tricky. Its center is semi hidden between a maze of narrow alleys.  Several restaurants and shops are set around its main plaza, as well as a big sculpture of Al-Atrash and Junbalat, two Druze leaders. The Jewish synagogue is in an alley off the main square. Renovated in 1873 it is similar in style to some of the synagogues in Safed.  Several decorated stones inside the synagogue are possibly from another synagogue that stood here in antiquity. By Local tradition they are from the Second Jewish Temple in Jerusalem. A new visitors center opened in 2018 near the synagogue presents the life of Margalit Zinati, the last Jew of old Peki’in.

A tour of Peki’in can be combined with a day tour in the north.

Contact us to inquire more about a private tour to Peki’in: