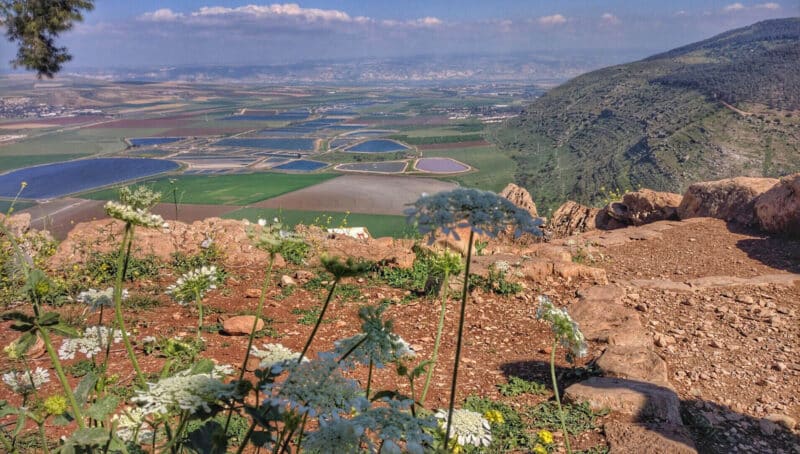 Set at the northeastern edge of Samaria, between Tel Jezreel and Beit She’an, Mount Gilboa towers high above the Jordan and Jezreel Valley. The mountain offers scenic rides, lookouts and hikes, and is soaked with natural beauty and dramatic biblical history.

Mount Gilboa is first known in the bible as the battle site between the Israelites, led by Saul, and the Philistines. Despite predicting his loss by Samuel, whose spirit was raised by the witch of Ein-Dor, Saul confronts the Philistines, and is indeed defeated. Losing even some of his sons, Saul chooses to fall on his sword and die. When David hears of this in Ziklag, he laments over Saul’s death, and curses the Gilboa mountains:

“Ye mountains of Gilboa, let there be no dew nor rain upon you, neither fields of choice fruits; for there the shield of the mighty was vilely cast away, the shield of Saul, anointed with oil” (2 Samuel 1:21)

Indeed, most of Mount Gilboa remained unforested until the 1950s. However, today Mount Gilboa is covered with a meadow of pine trees, planted by the Jewish National funds. It is also known for its spring blossom, forming carpets of wildflowers, and many outdoors activities. Its main attractions are –

Har Saul –  A majestic viewpoint, some 1600 feet above the Beit-She’an valley, providing breathtaking panoramas of the Jezreel and Jordan valley, the Lower Galilee and the mountains of biblical Gilead. Opposite the mountain is Givat Hamoreh, where the Philistines camped before the battle against Saul. To the west are the plains of the Jezreel valley, associated with Armageddon and the end of the world according to the Book of Revelations.

Mount Gilboa Iris Reserve –  The fields around Mount Barkan are known for the beautiful iris flowers, once an endangered species, that blooms in shades of purple in the winter months.

Mayan Harod – A spring at the foot of the Gilboa where Gideon tested his warriors’ alert (Judges 7). Centuries later, in 1260 CE, the Mamluks fought here against the Mongols, blocking their invasion into Israel and Egypt (battle of Ain Jalut). Today, the spring’s water is channeled to a public swimming pool appreciated by the locals in hot summer months.

A drive along Mount Gilboa can be combined with a day tour in the north.

Contact us to inquire more about a private tour to Mount Gilboa: