Ramat Rachel archaeological park is an impressive yet enigmatic site about 3 km south of Jerusalem. It bears rich remains from several periods in antiquity, and yet its name and history are uncertain. 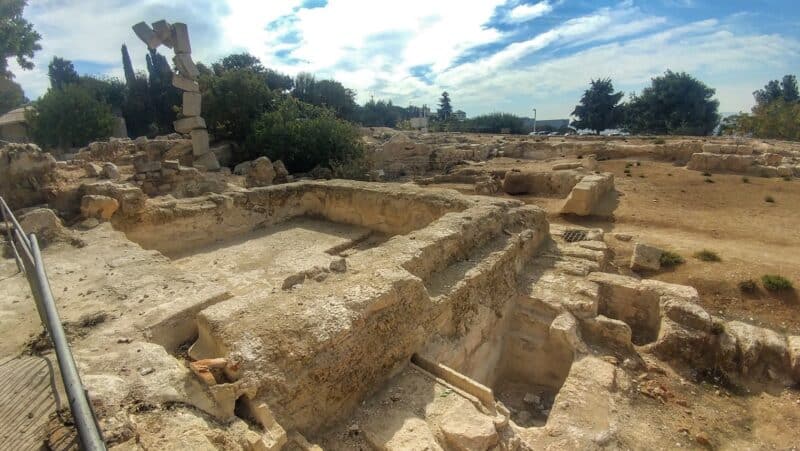 The site is on a hilltop east of the main road between Jerusalem and Bethlehem, in the vicinity of Kibbutz Ramat Rachel. In 1930’s a burial cave was uncovered on the site, but only in 1954 large scale excavation took place at the site, as the kibbutz wanted to build there a water reservoir. The excavations found foundations of palace from the last stages of the First Temple Period, and remains of a Byzantine period monastery built over its remains centuries later.

Aharoni, who uncovered the Biblical palace, suggested it was built by King Jehoiakim. This lavish palace was one of the reasons Jeremiah condemned him –
13 “Woe to him who builds his palace by unrighteousness,
his upper rooms by injustice,
making his own people work for nothing,
not paying them for their labor.
14 He says, ‘I will build myself a great palace
with spacious upper rooms.’
So he makes large windows in it,
panels it with cedar
and decorates it in red.

15 “Does it make you a king
to have more and more cedar?
Did not your father have food and drink?
He did what was right and just,
so all went well with him.
16 He defended the cause of the poor and needy,
and so all went well.
Is that not what it means to know me?”
declares the Lord.
17 “But your eyes and your heart
are set only on dishonest gain,
on shedding innocent blood
and on oppression and extortion.”

His academic rival, Y. Yadin, suggested an earlier date to the palace, and identified the site with “House of Baal” mentioned in 2 Kings 11:18. G. Barkai, who also excavated at the site, suggested the site is “MMST” a placename known only from ancient inscribed jar handles. O. Liphshitz who also excavated at the site, believes it to be an administrative center in the Assyrian, Babylonian and Persian periods. It is also possible that the palace dates to the time of King Uziah, and that here he retired when he became a leper (2 Chr. 26:21).

In 2020 architectural remains of another royal mansion from the first temple period were found half-way between Ramat Rachel and Jerusalem. The evidence suggest it was part of a smaller complex, perhaps another royal residence of king Jehoiakim.

The site is free of charge and accessible from kibbutz Ramat Rachel. In 2002 art works by Ran Morin were installed around the Biblical palace. Morin is also known for his environmental artwork at the eastern edge of the Kibbutz (Park of Olives).

A tour of Ramat Rachel Archaeological park can be combined with a guided day tour of Jerusalem. 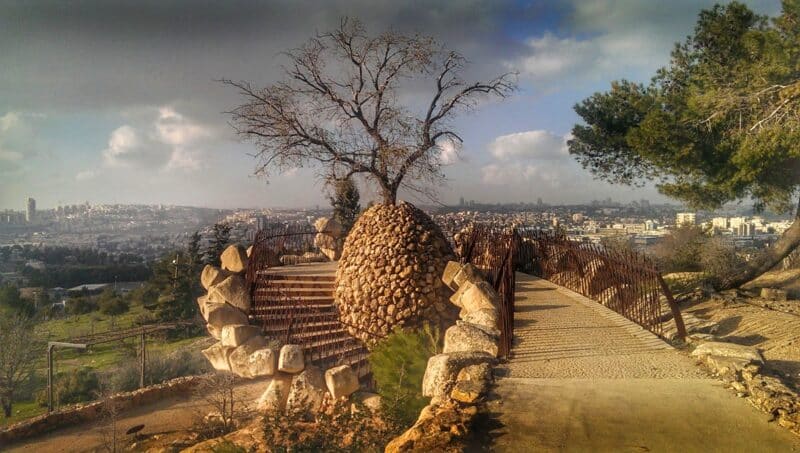 At the western edge of the park is a beautiful lookout of western Jerusalem. This viewpoint was also designed by Ran Morin, who formed a round balcony around an oak tree. Next to it several military trenches from 1948 battles are still visible. The lookout was built in memory of Yair Angel, a member of Kibbutz Ramat Rachel who died in 1996 during his military service in the Israeli navy seals unit (Shayetet 13). יהי זכרו ברוך

Contact us to inquire more about a private tour to Ramat Rachel Archaeological Park: