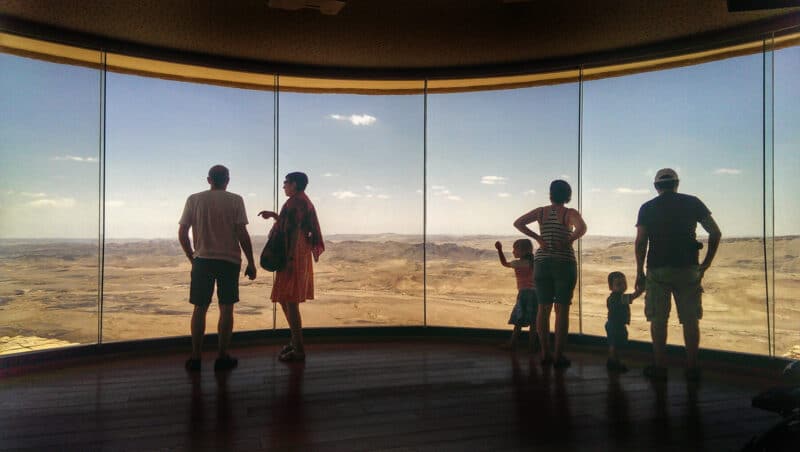 Perched on a cliff over the northern rim of Ramon Crater, the Mizpe Ramon Visitor center was built in the 1970s to introduce the Crater for tourists and school groups. Remodeled in 2013, the visitor center now offers a 1 hour guided tour through an innovative interactive exhibit. With dynamic models it presents the natural process that formed this magical site, and its special wildlife.

The center also has a new wing commemorating Ilan Ramon, Israel’s first astronaut, who died in the 2003 Colombia disaster when returning from space. Ramon grew up in the south, and his last name, Ramon, is named after the Crater. The memorial also pays tribute to his son, Assaf Ramon, who died in a F16 crash because of ‘vertigo’.

“I have been to Ilan Ramon’s monument countless times, and again and again I find myself in tears. This man stands for everything this country should strive to be. Rest in peace noble, hero. We will not let your legacy fail!” , team member, Edan Geva

The center is open every day of the week and charges an admission fee. The guided tours depart every 15 minutes. It is recommended to reserve the tour in advance.

A tour of the  Ramon Crater Visitor Center can be combined with a two days tour in the Ramon Crater.

Contact us to inquire more about a private tour to the Ramon Crater: