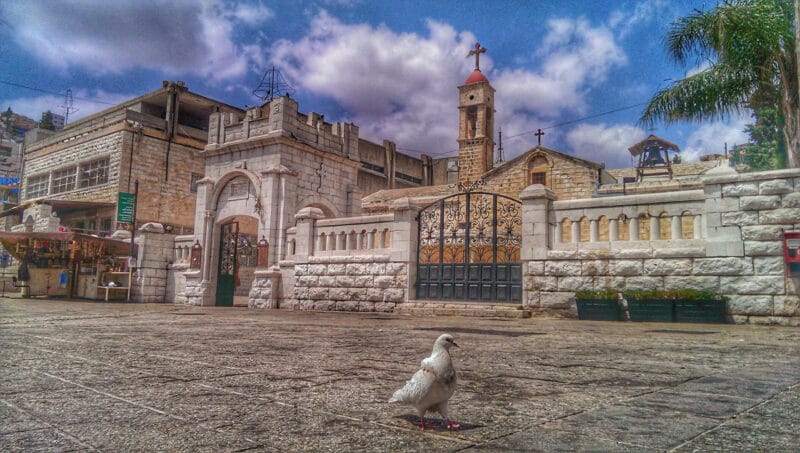 Known also as the Greek Orthodox Church of the Annunciation, the Church of Saint Gabriel is built over old Nazareth’s spring. By Orthodox tradition, Mary was first approached here, at the spring, by Archangel Gabriel. Later, at her house, he announced to her that she is would bear the Messiah. The Orthodox tradition is based on the apocryphal Protoevangelium of James, an uncanonized source dated to the 2nd century CE. The book’s focus is Mary, and the childhood of Jesus in Nazareth. Among others, it states that angel Gabrial first appeared to Mary when she was fetching water in the local spring. Frightened at his sight, she ran back home. There he appeared again and delivered the message of her miraculous conception.

“(1) And she took the cup and went out to fill it with water. (2) Suddenly, a voice said to her, “Rejoice, blessed one. The Lord is with you. You are blessed among women.” (3) And Mary looked around to the right and the left to see where this voice came from. (4) And trembling she went into her house. Setting down the cup, she took the purple thread and sat down on the chair and spun it. (5) Suddenly, an angel stood before her saying, “Do not be afraid Mary. You have found grace before the Lord of all. You will conceive from his word.” (Gospel of James 11:1-5).

The church was first built by the Crusaders, in the 12th Century CE, but it was destroyed a century later, by the Mamluks. In 1749 Daher el-Omar permitted the Greek-Orthodox to rebuild a new church over the spring, which was complete a year later. Standing to this day, the church is highly ornate. Its Byzantine-Greek-style wall paintings were redone in 1977-8 by Romanian artists. The wooden veil (Iconostastis) of the church is also a masterpiece. A Greek inscription in its base indicates it was a gift of a Greek Merchant in 1767. The crypt leading to the spring’s source is dated to the time of the Crusaders. Today it is decorated with marble plaques and Ottoman era colorful tiles. Here the pilgrims can see and feel the spring’s water, which use to continue to a public fountain (Mary’s well). A wall painting above it depicts the Angel’s visit. The inscriptions beneath the image, in Arabic, Greek, Russian and English, read: “Hail, thou that art favoured, the lord is with thee, blessed art thou among women.” Saint Gabriel Church is the most sacred place in Nazareth for the Greek-Orthodox church. In the past, the Russians had a pilgrim’s center near the spring, which was nicknamed by the locals as the Moscowbiya.

The church is right next to Nazareth main road, behind Mary’s Well and about half a mile north of the Catholic Church of Annunciation. It is open Monday to Saturday, free of Charge. Visitors are requested to dress modestly and speak softly.

A tour of Saint Gabriel Church can be combined with a guided day tour of Nazareth and the Galilee.