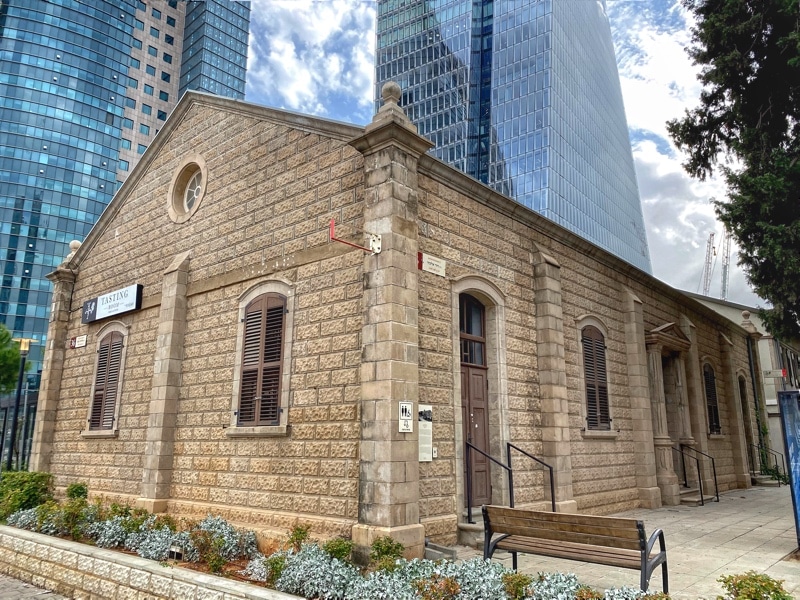 Sarona is one of the most successful conservation projects executed in Tel-Aviv. A 19th century colony, founded by pietist Christians from southwestern Germany (the Templars), was painstakingly renovated into a popular commercial and recreational center, including a big indoor food market (Sarona Market).

History of Sarona and Its Restoration Project

During the 19th century, on top of the Jewish Zionist movement, two small Christian groups also desired to settle in the Holy Land. An American congregation, mostly from Maine, US, settled in 1866 next to Jaffa (The American Colony). They believed the return of the Jews to the land would lead to Christ’s promised return. Sadly, upon their arrival, the group lost many of its members, and within two years they dispersed. Another Christian group, from Germany, who called themselves Templars (not to be confused with the medieval Knight Templars) followed a similar ideology. They established seven agricultural colonies across Palestine and were the first to introduce modern agricultural technology in the Holy Land. One of them would be Sarona, about 3 miles northeast of Jaffa. Retaining their German identity, in the 1930s they affiliated with the Nazi political party, and even ran Nazi parades in their colonies. Being so, in 1941, during World War II, the British deported all of the Templars, to Germany and Australia. Later the British used Sarona as a military camp, which was attacked several times by Jewish resistance groups. In the 1950s, all the Templar colonies were appropriated by the state of Israel. Sarona became an Israeli governmental and military space, some of it is occupied by the IDF to this day. In the turn of the 21st century, a massive renovation project was launched to restore Sarona’s historical buildings and combine them with a new a business center. Five buildings were moved in their entirety, relocated for a new main road (Kaplan Street), and then restored.

Completed in 2014, Sarona is now a part of the business center in the heart of Tel-Aviv. Its 33 meticulously restored buildings now house modern boutique shops, cafes and restaurants. Along its southern end is a new and first of its kind in israel covered market – Sarona Market

Among its notable historical buildings –

Frank House (Aranya 9) – Mr. Johan Frank was the colony’s teacher, which included his role of preparing the Templar’s youth for confirmation. The elongated windows of his house hint to ecclesiastic architecture. 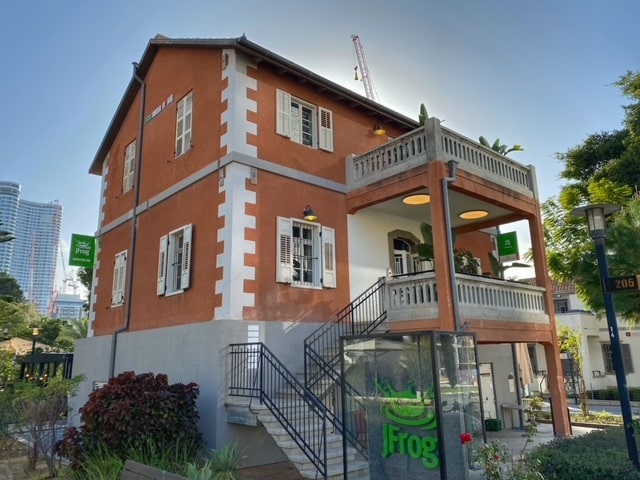 Steller House (Kaplan 22) – The Stellers owned a big orange grove and had a big dairy farm next door (Mandler 4, today’s Apple store). They were deported by the British in 1941. Later, their house was used by Israel as a government office. Relocated to its current position, and conserved in 2005, its balcony, windows, doors, and even wall paintings were nicely restored. Today, a fashion store and an Irish style-bar operate in the building.

Grözinger House (Kaplan 30) – Mr. Grözinger operated a butchery and meat shop in his yard, and was the first butcher in Palestine to use a cooling room. He was known for his meat, and was especially popular for his bacon sausages. The family was deported by the British to Australia in 1941, and in the 1950s the house was turned to an Israeli government office. In 2006, the house was moved 70 feet to its current location and restored. Today, a Glat-Kosher pizza resturant operates in the building.

The Old Community House (Kaplan 34) – The Templars didn’t have a church, so the community house was for both secular and religious public assemblies. Completed in 1873, the building had a typical 19th century of southwstern German design. It included a fireplace with a chimney, and red brick rooftop designed for winter snow. A quote from Psalms 99:4 is engraved above the main entry, in German and Arabic. Additional quotes from the bible are engraved in the pillars inside. After deporting the Templars, the British used this building as their camp headquarters. After 1948, the building was turned into an Israeli post office. During the renovation project, the house was moved 100 feet to its current location. Its original clock tower and bells are now on display in Sarona’s Visitor Center.

The New Community House (Kaplan 36) – In 1911, the first community house was turned into a school, creating a need for a new community house. The new building, made out of locally produced bricks, is a single story, wide and functional structure. It was a popular weddings venue, and also used as a ballroom. In the 1930s, a Nazi flag, with a swastika, fluttered above the building for almost a decade. After deporting the Templars, the British turned the community house to a military cinema. In the 1950s it was turned into a military cafeteria and a synagogue by Israel. The building was moved in its entirety in 2005 to its current location and restored.

Graze House (David Elazar 6) – The home of the colony’s blacksmith also operated a nunnery. Specializing in metal, Mr. Gottlöb Graze installed iron shutters in his windows, and had a horse-shaped weathervane on his rooftop. Later, the building was used by Israel as the office of the military advocate general.

Lämmle Family House (David Elazar 9-11) – The two-story house was home to Friedrich Lämmle, one of the prominent members of the Sarona community. Besides being the colony’s landscape designer, he had orange and citrus groves, vineyards, a dairy farm, a stable, and a honey factory. On the second floor, Mr. Lämmle had a grand piano, with images of Wilhelm the 2nd, and his wife, Augusta Victoria, hanging on the wall.  Later, this house was used by Israel’s military intelligence. For many years, some of Israel’s most top-secret operations were plotted here. Today, fashion stores operate in the building.

Günthner House (David Elazar 18)  – The Günthners operated a successful bakery and café. It was also popular  among the the German Jews of Tel-Aviv (the Yekes), reminding them of the smells and flavors of Germany. The family also operated the printing house in the old winery. From the 1950s up to 2005 the building was used by the Israeli IDF. Today,  it is used by the Technion.

The Olive Press (David Elazar 22) – Part of the Pfugfelder House, here the Templars introduced the first industrial olive press in Palestine. Conveyor belts transported the energy of a diesel engine, to an innovative hydraulic system to crush and then press the olives, replacing the traditional mule-powered olive presses. Nicely restored, visitors can watch the banded wheels still spinning, and a short video about the history of the colony.

Schmidt House (David Elazar 24) – Built in 1872, the Schmidts were the only family in Sarona to have a radio receiver in its early years. Being so, their house often hosted community gatherings, socializing and hearing radio shows from Germany. The Shmidt House is the only house in Sarona that was not changed in later years. After 1948, the building was used by the Israeli IDF, and its upper floor functioned as a synagogue. 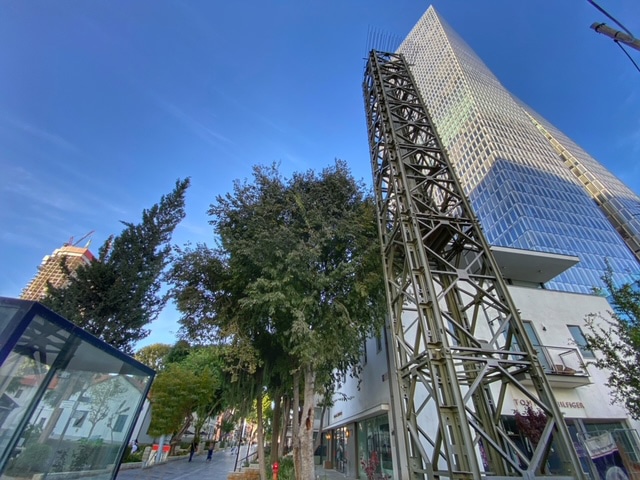 Tahal (David Elazar 19) – The white Bauhaus-style structure was added by the British in the1940s, replacing a Templars’ period barn. In the 1950s, it was used by Israeli secret service for a top-secret mission, operating mail pigeons. Flying from neighboring countries, the pigeons delivered encrypted messages attached to their legs. The metal tower next to the building had a similar purpose. Every night, an Antenna raised above it would track encrypted electronic messages from Israel’s spying network.

The Old Winery (David Elazar 30) – Founded in 1893, here the German Templars began operating a winery, mostly for export. With the growth of demand, a new winery was built next to it, and the old structure was use for bottling and packaging. Later, the building was used as a printing house, a postal stamps print, a coin mint, and a government archive. Nowadays, after a beautiful restoration, the building houses chef Ran Shmueli’s fine-dining restaurant, Claro.

The New Winery (David Elazar 27) – Established in 1910, the grand new winery building could cope with the influx of Sarona’s wine making. The ground floor was used for squeezing the grapes. In cellars below, the wine was kept in hundreds of wood barrels, for fermentation. Unfortunately, the new winery only operated for 5 years due to port closure when World War I broke out. In these cellar, in 1948 Israel secretly assembled used British Auster fighter planes purchased from the UK. Nowadays, part of the winery is appropriately used as a wine bar.

The Templar’s Tunnel: In 2008, while restoring the wineries’ buildings, a tunnel was uncovered between them. The tunnel enabled transportation of the barrels, on a small donkey-driven carriage, between the old and the new winery. 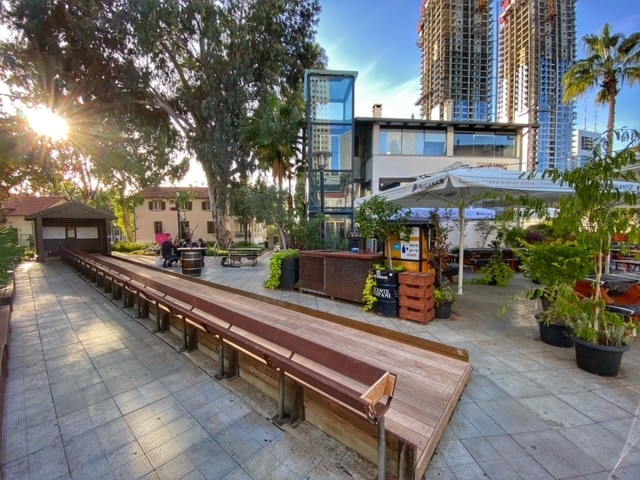 Kübler House (Mandler 3)  – The Kübler House was built at the turn of the 20th century. On top of running a banana plantation, Mr. Kübler operated a bar and a German-style Bowling alley (Kegelbahn) on the ground floor of his house.

Later, he also built a tennis court in the back of the house. Today, a beer bar (Biergarten Paulaner) operates in the building, perfectly matching its historical legacy.

The Singing Benches of Sarona: Some of the wooden benches spread around the beer bar will automatically play Israeli song writer Haim Beer songs if sat on.

“The Widows” House (Mandler 8) – This house was nicknamed after two of the Community’s widows who lived here. The house was remodeled in the 1930s and given a Bauhaus / International style (which was removed). In the 1950s, it was used by Israel’s ministry of agriculture. Today, an optic Israeli company (Opticana) has a store and an exhibition on Israeli optics.

Vennagel House (Mandler 9) – Mr. Johannes Vennagel was an architect and builder. His house, completed by 1872, combines local and rural German architectural elements. After 1948, the building was used by the IDF’s spokesman. Today, a chocolate-bar and a natural beauty shop (L’Occitane) operate in the building.

Vennagel’s Family Gold Treasure: Before the British deported the Vennagel family, Hugo Vennagel, Johannes’ grandson, concealed 23 gold coins in another family house in Sarona. In 2003, architect Dr. Danny Goldman managed to track Hugo while researching the colony’s history. Hugo, 102 years old at the time of the interview, not only remembered the exact location of the treasure, but through skype directed Goldman’s team to the spot. The coins were returned to his children in a ceremony. See a video of the treasure discovered here.

Baldenhofer House / Sarona Visitor Center (Mandler 14) – The former house of the Baldenhauper, was later the Israeli PM library. Today, as a museum, it presents the unique history of Sarona since its establishment, some 140 years ago.

Venus House (Mandler 10) – Built in 1886, Mr. Venus operated a woodshop which was in high demand (“Venus Furniture”). After 1948, the house and carpentry were used by Israel’s Military Police, and the IDF spokesman. Today, a design shop (Soho), operates in the former carpentry’s building.

Sarona Market – One of the most popular attractions in Sarona is the indoor food market, the only one of its type in Israel. 90 different stores, street-food stands, restaurants and cafes offer a wide range of dishes and fresh local produce. See a video of the Sarona Market here.

“Ein Deutscher kann Württemberg verlassen, jedoch Württemberg wird niemals einen Deutschen verlassen (You Can take a German out of Württemberg, but you can’t get Württemberg out of the German)”. team member, Fredi Wiesner.

Contact us to inquire more about a private tour of Sarona: