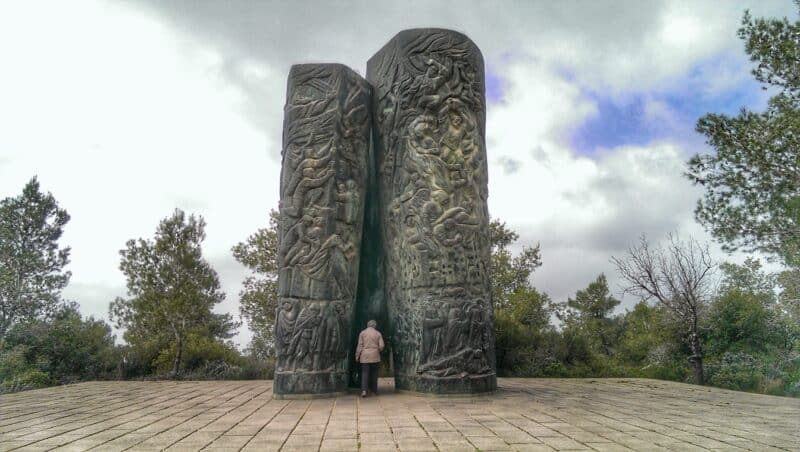 The Scroll of Fire monument (in Hebrew Megilat Ha-esh) is an iconic sculpture in the Jerusalem hills that commemorates the turbulent Jewish history from the Holocaust to the foundation of the state of Israel.

History of the Scroll of Fire Memorial

After establishing the state of Israel, it was decided to forest the mountains of Jerusalem with 6 million trees in memory of the 6 million Jews who perished in the Holocaust. The project, known as the Martyr’s forest, was comprised of 4.5 million pine trees representing the adult victims, and 1.5 million cypress trees, representing the Jewish Children who were killed by the Nazis and their collaborators.

The Scroll of Fire memorial was inaugurated in 1971 on a hilltop in the forest. It is work of Warsaw-born artist Nathan Rappaport whose memorials of the Holocaust is a central theme in his work. The monument is 26 feet high and made of rusted bronze. Its shaped like two intertwined scrolls, one representing the Holocaust, and the second dedicated to the struggle for a Jewish state, the state of Israel. Reliefs on their outer face depict detailed scenes of both events. On the first you can spot people in concentration camps, Janusz Korczak and his orphaned children, fighters of Warsaw Ghetto, and survivors immigrating to Israel.

On the second Scroll the images include an Israeli soldier is heading to defend the country, a man blowing the Shofar at the Western Wall, a young child holding fruit of the land, a group of people dancing hora, and an imaginary procession of Jews carrying the Temple’s Menorah back from the arch of Titus to Jerusalem.

By shaped like scrolls, the monument alludes to the Jewish Bible, suggesting these events are no less epic. It also relates to the Jews being the people of the book. The scrolls also form two memorial rooms, one to the victims of the Holocaust, and the other to the casualties in the struggle for a Jewish state.

Touring the Scroll of Fire Memorial

The Scroll of Fire memorial is perched on a hilltop in Jerusalem mountains, near the village of Kesalon. It is best reached through the scenic 395 road from Beth Shemesh. Aside the monument the site provides stunning views of the Shephelah and the coastal plain.

A tour of the Scroll of Fire Memorial can be combined with a guided day tour of Jerusalem or the Shephelah.

Contact us to inquire more about a private tour to the Scroll of Fire Monument: