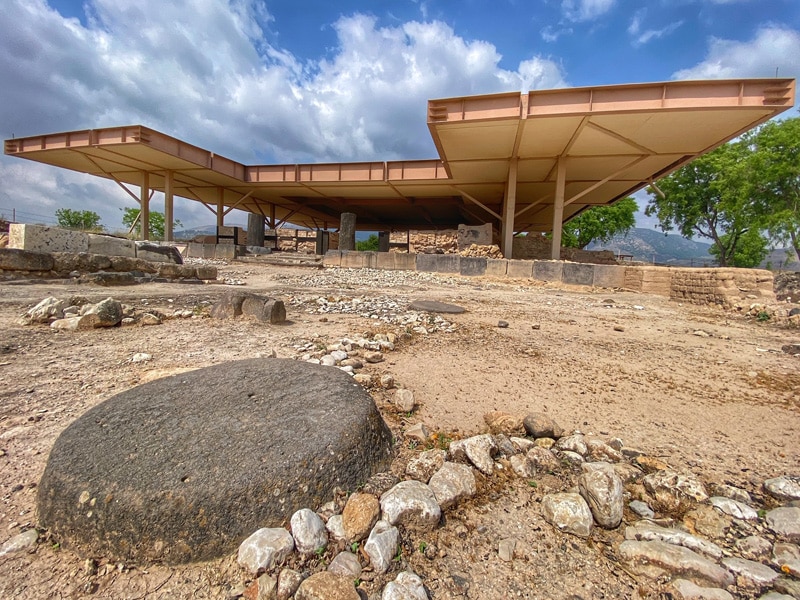 Set on a hill overlooking the Hula valley and along an important trade route (the ‘Via Maris’), Hazor was the biggest city in Canaan. Covering an area of 200 acres, Hazor was rightfully described in the bible as the “Head of all those Kingdoms” (Joshua 11:10) yet it was conquered by Joshua and his forces. Later the Israelites settled in Hazor’s acropolis, but after its conquest by the Assyrians, the site was abandoned. Today, Hazor is a national park, presenting significant and fascinating archaeological finds that link to the bible.

Hazor is mentioned both in early Egyptian and Mesopotamian sources. The 18th century BCE archive of Mari, 30 miles northeast of today’s Baghdad, indicates precious metals, garments, and even musicians coming from Hazor. Egyptian sources also indicate Hazor was a big city-state. Despite its size and power, the bible records Joshua conquering Hazor and burning it –

“ At that time Joshua turned back and captured Hazor and put its king to the sword. (Hazor had been the head of all these kingdoms.) 11 Everyone in it they put to the sword. They totally destroyed them, not sparing anything that breathed, and he burned up Hazor itself. (Joshua 11:10-11)

Later, however, the book of Judges indicates Hazor is still a Canaanite city, ruled by a king called Jabin (Judges 4:1). In the days of king Solomon Hazor is among his prime cities (1 Kings 9:15). It remains an important city until its destruction by the Assyrians in 732 BCE (2 Kings 15:29).

Hazor’s was excavated intermittently by several expeditions, starting in the 1920s. The site proved to bear 21 successive layers of occupation, the earliest dating back to 5,000 years ago. The most significant periods are the middle and late bronze age when Hazor was a Canaanite metropolis. The city’s acropolis was also in use by the Israelites. Among the mains finds made in Hazor: 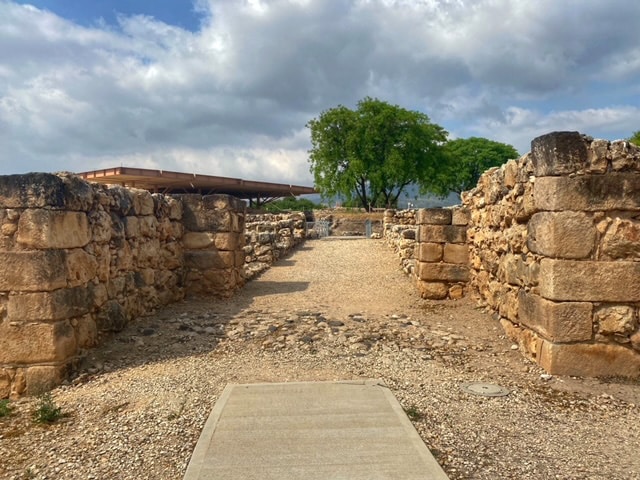 Six-chambered gate and casemate wall: These fortifications were also found in Megiddo and Gezer, matching the biblical description of Solomon fortifying these sites (1 Kings 9:15). Nevertheless, now days scholars believe these fortifications should be associated with one of the Israelite kings, perhaps Ahab.

Canaanite-era Ceremonial Palace: This biggest scale public structure from Canaanite times is designed like a palace but has an altar at its front. Found burnt in a big conflagration, some suggested to attribute its destruction to Joshua as attested in the bible (Joshua 11:10-11).

Canaanite Archive?: Over 20 cuneiform tablets were found in Hazor over the years, some as surface finds by tourists. Some were legal debates, some tax receipts, and some were prophecies based on liver reading.  These documents suggest Hazor once had a big archive that might still be found.

Canaanite Temples: Four temples and several clusters of standing stones (Matzevot) from Canaanite times were found in different parts of the mound. These cultic objects and shrines are a fantastic insights to Canaanite worship that is often denounced by the bible.Water shaft: 150 feet deep, this shaft was dug to reach groundwater beneath the city. Dating it is a matter of much debate, but most of the scholars believe it was dug by the Israelites to prepare to a long Assyrian siege.

The Fortress: Located at the highest point of Hazor’s acropolis, the fortress dates to the Israelite period, and was probably set to alert on any Aramean or Assyria attack. Its entrance, combining big proto-Aeolic capitals, was reconstructed at the Israel Museum.

Four-Chambered house with an olive press: Found next to the water shaft, this house was moved in its entirety, to clear the shaft’s entry. The building represents a domestic architecture from the Israelite period, with a typical internal division of the house to four main chambers. The dwellers of this house also operated an olive-press, one of the main industries in the Holy Land in antiquity.

Tripartite Pillared Building: Now placed next to the cour-chamered house, this was the first public building discovered in Hazor, in the 1920s. Originally used as a stable or a warehouse, next to the Israelite gate, it was relocated to enable uncovering the Canaanite layers beneath it.

Hazor is a national park, open every day of the week and has an entry fee. The site offers only a few signs with explanations and partial shade which can be significant in the summer months. It is recommended to combine the tour of Hazor with a visit to the local archaeological museum in nearby Kibbutz Ayelet Hashachar.

A tour of Tel Hazor be combined with a day tour in the north.

Contact us to inquire more about a private tour to Tel Hazor: