Located forty 25 miles north of the Sea of Galilee and at the base of Mt Hermon, Caesarea-Philippi is the location of one of the largest springs feeding the Jordan River. It is also situated along the Via Maris, the international road that connected Egypt and Mesopotamia.

History and Archaeology of Caesarea-Philippi

The site may have been a cultic center already in the Canaanite period, as the Book of Joshua mentions “Baal Gad, below Mount Hermon”. Yet, so far not remains from Canaanite times were recovered at the site. Caesarea-Philippi was inhabited for certain in the third century BCE, perhaps by veterans of Alexander the Great after the conquest of the Holy Land. It was named then “Paneas” and was known for its cultic center of the god Pan. During the Hellenistic period the Ptolemies, Seleucids, Itureans, and Cleopatra VII controlled the city at different times.

Caesarea-Philippi and the New Testament

In the first century CE Herod Philip, the son of Herod the Great, established Paneas as the capital of his tetrarchy, and renamed it “Caesarea-Philippi” (after himself and after Augustus Caesar). By that name the site is mentioned in the Gospels as the northernmost point visited by Jesus and his disciples. During this visit Jesus challenged his disciples to define his nature –

“When Jesus came to the region of Caesarea Philippi, he asked his disciples, “Who do people say the Son of Man is?” They replied, “Some say John the Baptist; others say Elijah; and still others, Jeremiah or one of the prophets.” “But what about you?” he asked. “Who do you say I am?” Simon Peter answered, “You are the Christ, the Son of the living God.” (Matthew 16:13-16)

In return, Jesus declared Peter will be the “foundation” of his community:

“Blessed are you, Simon son of Jonah, for this was not revealed to you by man, but by my Father in heaven. And I tell you that you are Peter, and on this rock, I will build my church, and the gates of Hades will not overcome it. I will give you the keys of the kingdom of heaven..” (Matthew 16:17-18)

In his reply Jesus uses a play on words in Greek, as “Petrus” means a rcok in Greek. Peter’s name, therefore, is a metphor for his solid faith in Jesus.

Why Did Jesus Declare the Role of Peter in Caesarea-Philippi?

While active mostly around the Sea of Galilee, Jesus went quite a distance with his disciples to announce the special role of Peter at Caesarea-Philippi. Was this done for a reason? Caesarea-Philippi was then known as a pagan cultic center. Various pagan deities were worshiped at the site, especially around the large karstic cave. It is possible that Jesus deliberately chose this area to declare Peter’s special role in the New Christian church, while facing a big pagan center. A hint to this possibility lies in the fact that when Jesus appoints Peter he concludes – “..and the gates of Hades will not overcome it.” No where else Jesus refers to any god (In Mat. 12 he refers, once, to a Canaanite god, not a Roman pagan deity). In fact, one cannot rule out the possibility that when Jesus said that very sentence, he paused, and maybe even pointed to the Cultic cave, associating it with Hades and the afterlife.

The importance of Caesarea-Philippi to Christianity grew with time. While in the first centuries it was still a pagan city, in the fourth and fifth centuries it was already an Episcopal center. After the Arab conquest (7th century CE) the city’s name was changed, again, to “Banias” yet it remained as a prosperous city on the road to Damascus. In the Crusaders period it was surrounded by a strong wall and towers whose remains are still well preserved. After the Crusaders period the city’s importance declined and eventually it was abandoned. 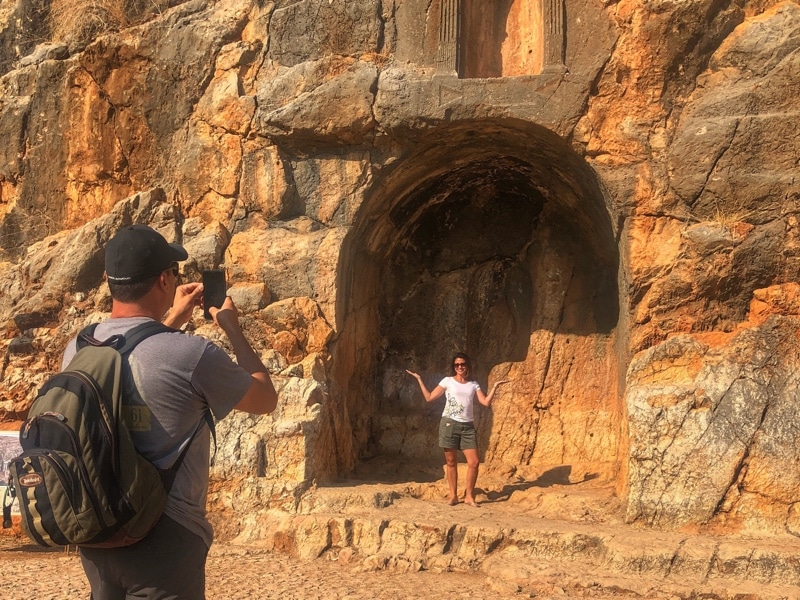 Large scale excavations were carried at the site in the 1990’s, uncovering substantial remains of Agrippa II’s palace, and finds from later periods. Most significant were the discoveries made at the city’s cultic center. Various sculptures of Pagan deities were retrieved from the main cultic cave devoted to Pan, including one of Pan himself. Additional shrines lined up next to the main cave are further evidence to the pagan nature of the city in Roman times.

Known today more as “Banias”, Caesarea-Philippi is under the jurisdiction of the Nature park authority of Israel. Besides the wealth of archaeological finds, marked hiking trails enable a hike along the Banias river and its lush vegetation. Most popular is the hike to the Banias waterfall, including a walk along a hanging trail.

A tour of Caesarea-Philippi (Banias) can be combined in any Multi day tour of Israel.

Contact us to inquire more about a private tour Caesarea Philipi: