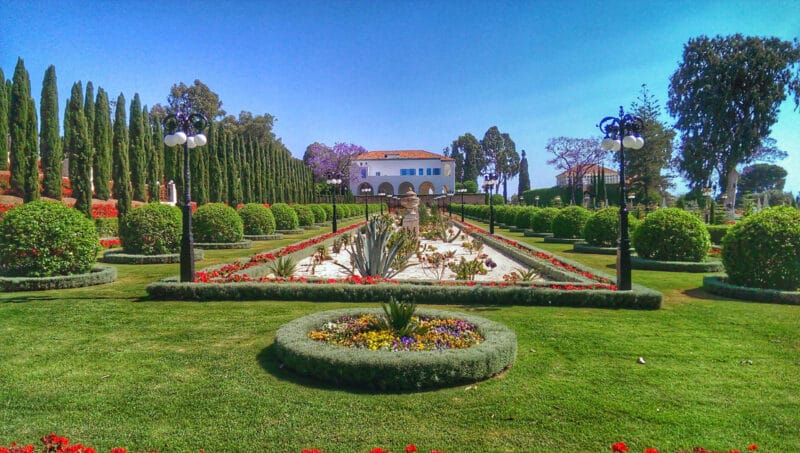 The Bahai Gardens of Akko are a grand  landscaped complex majestically engulfing the mansion and burial site of the Baha’u’llah, founder of the Bahai faith. This site is the holiest place for Bahai believers, and is their direction of prayer (‘Qiblin’).

History of the Bahai Gardens in Akko

Bahai is one of the youngest religions in the world. Incepted in Iran in the 19th century, its founder, Siyyid ‘Ali Muhammad proclaimed to be a ‘Báb’ (from Arabic: a Gate). After six years of manifesting for new revelations and prophets, he was executed by the Muslims in 1850 (Today, his burial site is at the center of the Bahai Gardens in Haifa). Two years later, in 1852, Mírzá Husayn-‘Alí claimed to be the fulfillment of these prophecies, and entitled himself as Bahá’u’lláh (in Persian: ‘Glory of the Lord’). When he settled in Turkey, Bahá’u’lláh was arrested by the Ottomans, and banished to Akko‘s prison, with his family. After several years he was released but stayed in Akko. In 1879 he moved to a mansion north of the city where he spent the rest of his life, and where he was also eventually buried.

Known as ‘Bahji Mansion’, the 8000 square feet abode is surrounded by beautifully sculptured radial gardens, whose design blends eastern and western elements. Marble columns and decorative Greco-Roman urns adorn the main entrance. Along the paths, Persian-style flower carpets intertwine with local trees and bushes. The mansion and its surrounding gardens form a special spiritual realm, of peace and serenity, perfectly matching the pacifistic proclamations of the Bahá’u’lláh.

Touring the Bahai Gardens in Akko

The gardens are open every day of the week 9:00 to 16:00 and are free of charge. The tomb of Bahá’u’lláh is open Friday to Monday 9:00 to 12:00. A team of devoted staff is happy to explain and answer any questions. Visitors are to follow a respectful dress code and behavior.

A tour of the Bahai Gardens in Akko can be combined with a day tour of Akko, Haifa and Caesarea, or a day tour in the north.

Contact us to inquire more about a private tour to the Bahai Gardens in Akko: