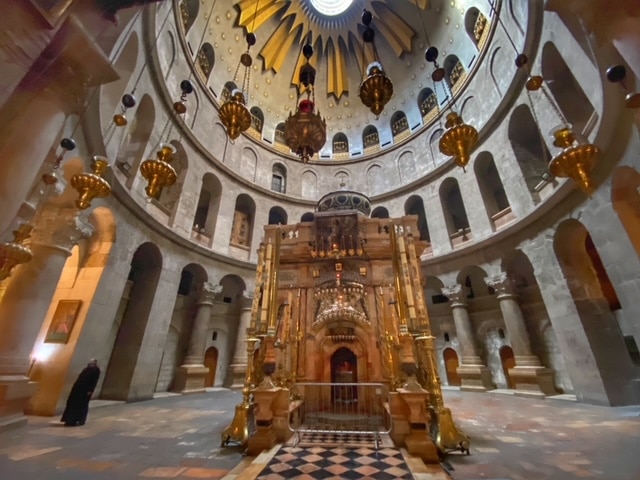 The “Holy fire” ceremony is one of the most significant religious events in the history of Christianity in the Holy Land. Since the 9th century CE there is evidence of this ritual taking place every year on Easter Saturday in the Church of the Holy Sepulcher in Jerusalem. At its peak the Patriarch enters an aedicula believed to be built over the tomb of Jesus for prayer. After a 20 minutes he comes out with burning torches. In Christian faith the fire was sparked by the Holy Spirit, the same Holy Spirit who resurrected Jesus from the dead. The Holy spririt is therefore demonstrating its divine power every year at the same spot.

In previous years some ten thousand pilgrims would gather around the grave to light their own torches from this flame. Furthermore, lanterns lit by the same sacred fire would be transported to Ben Gurion Airport and flown to Orthodox churches around the world, especially in Eastern Europe. That same night they would be presented in the main churches of each country for midnight Easter Mass. As far as I know, this is the only one of two cases in the aviation industry where a flight with a burning fire is allowed on board, the other being the Olympic flame.

This year, due to the Wohan virus pandemic, for the first time in the history of the Church, the ceremony was held with minimal human presence.  Only four Church representatives, two policeman, and two press photographers were present. The event, which is so crowded and ecstatic in other years, was so quite and gloomy looking.

Here’s a short video of the event made by the Israeli ministry of foreign affairs:

On the other hand, the sacred fire was flown to the Orthodox churches around the world successfully. Ten aircrafts flew especially to Israel to carry the holy fire from different countries (Russia, Greece, Cyprus, Moldova, Kazachstan, Belarus, Poland, Romania, Georgia and Ukraine). The holy fire was placed in lanterns  and was transported to the airport by a diplomatic convoy with Israeli police escort. The lanterns were handed to the crew of each plane, with all the participants wearing surgical masks, and the lanterns eventully reached their designated churches succesfully.

The Pandemic and Rituals in Israel

The Chinese virus has caused many drastic changes around the world, including unbelievable changes in rituals of all religions, including  in Israel. A week ago, the Jews celebrated the Seder night, which marks the beginning of Passover holiday. This event is characterized by big family gatherings and a festive meal. But this year, for the first time in the history of Judaism, grandparents had to stay at their home, and every nuclear family celebrated the evening alone. Islam is also starting to celebrate Ramadan these days, and contrary to centuries-old tradition, this year there will be no festive dinners with extended families, and no public prayers in the mosques. In fact both synagogues, churches and  mosques are all closed for public prayers. People of all faiths pray at their homes, or in very small groups, in open space, maintaining a proper distance one from another. The religious excitement of the Christian Orthodox “sacred fire” ceremony, also fell victim to the plague, though not completely abolished.

As of April 20th 2020 Israel has reported “only” on 170 Corona related death cases, but the end of this plague doesnt’ seems close. My hopes and prayers that science will soon find a remedy to this pandemic, and our lives will soon return to normal!

Is the torch really lit by the Holy Spirit?

The crux of the annual “Holy  Fire” ceremony is the belief that the Holy Spirit ignites the torches the held by the Greek patriarch as he eagerly prays inside the tomb. To avoid potential suspicion, the patriarch enters the grave with a simple, pocket-free garment, with no place to hide any matches.

However, in 2018, Israeli journalist Yigal Musco interviewed an Armenian Church representative and got him to confess that the torch was simply lit from a the flame of a burning candle inside the tomb. This became a news item in several Eastern European countries, yet apparently it did not diminished the importance of the event in Eastern churches.