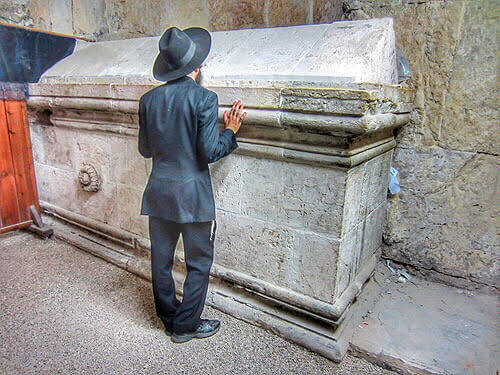 King David’s Tomb Mark is a large stone cenotaph (burial mark) inside a Romanesque style building on Mount Zion. Since the Middle Ages the site is venerated as the Tomb of King David, although the Bible states that he was buried in elsewhere: “Then David slept with his ancestors and was buried in the city of David.” (I Kings 2:10).

History of the Tomb of King David

The Old Testament records the crowning of David and his establishment of a new Capital. Although the new capital is more known by the name Jerusalem, when it is founded, the city is titled as “The City of David” (II Samuel 5:6-10). Later the Bible records David’s burial in the city, and many of his successors. The location of the royal tomb of Biblical Jerusalem is still uncertain, although some claim it’s remains lie in the southern slopes of the City of David.

Perhaps the lack of clear evidence for the tombs of the Davidic royal dynasty led to a medieval assumption that they are really on the Southern-Western hill of Jerusalem, known today as Mount Zion. The earliest record for this tradition is from a Muslim source from the 10th century. The current tomb mark of King David on Mount Zion is within a building whose Romanesque style dates it to the time of the Crusaders. Furthermore, the large burial mark (cenotaph) with its big flower decoration is also common to the Crusaders. Being a holy site, the tomb mark was never excavated, although ground penetrating radar survey indicated a big cavity beneath it.

Since 1948 the tomb mark is under Israeli control. The tomb mark became a very popular Jewish pilgrimage destination, and to this day a synagogue operates in its building. Visitors to the tomb are requested to be dressed modestly and man are expected to cover their head. The second floor the same building is affiliated with the site of the “Last Supper” (The Cenacle).

Contact us to inquire more about a private tour :