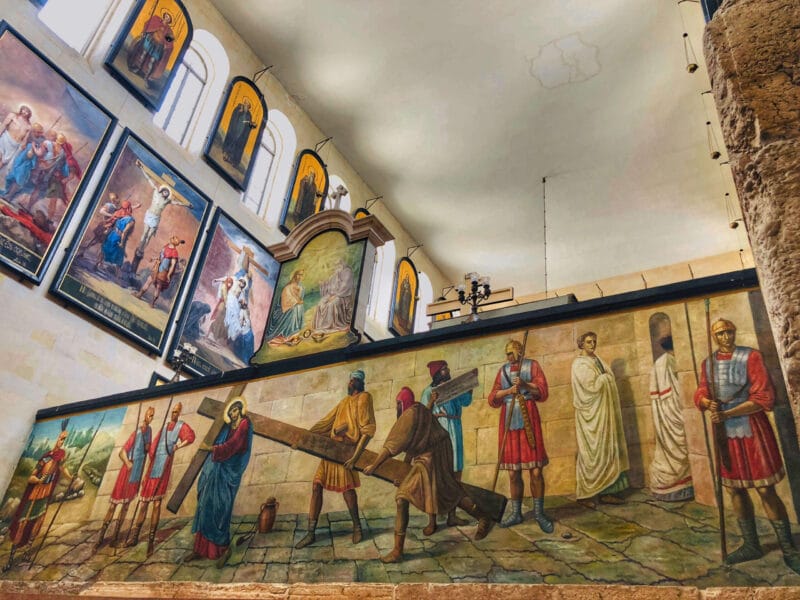 Alexander Nevsky Church is one of the more impressive assets of the Russian Orthodox Church in Jerusalem. It is in the heart of the Christian Quarter, right behind the Church of the Holy Sepulchre.

The property of the church was purchased in 1857 by the “Imperial Orthodox Palestine Society.” It was meant to be a hostel and a consulate for the many Russian pilgrims of the time. It was named after Alexender Nevsky, a Russian warrior-prince from the 13th century known for his victories against German and Swedish invaders. Excavation conducted prior to the construction uncovered in1883 significant remains of a wall and a gate. They were identified as the wall and “judgement gate” of Jerusalem in the time of Jesus. By local tradition, this is the gate through which Jesus walked on his way to the site of his crucifixion (the Golgotha in Greek, or Calvary in Latin). Being so, the plans of the building were changed. A new consulate and hostel were built outside city walls, at a site known today as “The Russian Compound”. The Alexander Nevsky complex was labeled as a church, although it is more of an archaeological and relics exhibit.

The grand entry into the Alexnder Nevsky church looks more like a hotel’s entry way. Its Baroque style interior includes a royal hospitality room, the “judgement Gate” and wall, and a hall where many icons and various relics are on display. On its walls are several large neo-classical style paintings depicting scenes of the Passion of Christ. The church has a humble entry fee and is open every day of the week.

For a full appreciation of the site it is recommended to have a guided day tour of Jerusalem that will include this site and other highlights of Jerusalem’s old city.