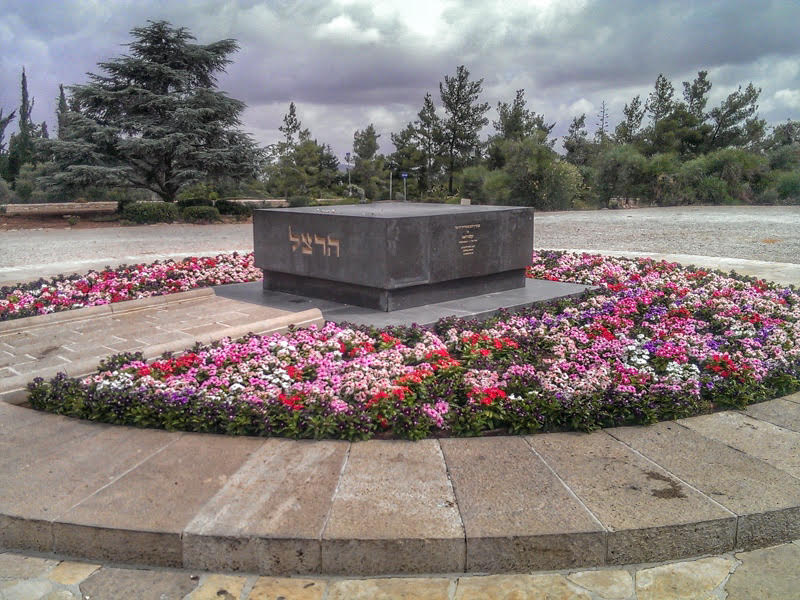 Set at one of the highest mountain tops in Jerusalem, Mount Herzl is the burial site of many of Israel’s national leaders, and where the main annual ceremony for Independence Day takes place.

In 1949, at the end of the war of Independence, the first Israeli government, led by Ben-Gurion, decided to establish its national institutions on Jerusalem. The ridge of Givat Ram became the site of the Israeli parliament building (the Knesset), the national museum (Israel Museum), and later the Supreme Court. At the edge of the city, a mountain top above Ein-Karem was designated as the burial site of Theodor Herzl, the “visionary of the State of Israel” and the founder of the Zionist movement. Herzl died in 1904, in Vienna, but in his will asked that if the State of Israel is formed, he would like to be reburied in its land. Ben-Gurion’s government declared that Israeli leadership will be buried around Herzl’s tomb, but even Ben-Gurion didn’t follow this rule. In his own will, Ben-Gurion asked to be buried in Sde Boker, in the Negev desert. As of 2020, only half of Israel’s National leadership who passed away are buried around Herzl’s tomb. Israel also decided to establish a military cemetery on the northern slope of Mount Herzl, and a National Holocaust museum at its western end – Yad Vashem. These sites combine present the Jewish leadership in the 20th century that led to the formation of the state of Israel and presents also a stark reminder of the terrible death toll in achieving, and maintaining, this goal.

Mount Herzl is open every day of the week, and is visited by many groups of tourists, youth group, and soldiers. A visitor’s center next provides a useful presentation of the life and legacy of Theodor Herzl. Around the Herzl’s tomb are burial of various leaders of the nation, such as Golda Meir, Yitzhak Rabin, and more. For a Zionist, having a walking tour from Yad Vashem to Mount Herzl through the military cemetery, is a very powerful experience.

A tour of Mount Herzl can be combined with a guided day tour of Jerusalem.

Contact us to inquire more about a private tour of Mount Herzl: