The “Prison of Christ” Sites in Jerusalem

Several traditions relate to the existence of a place where Jesus was imprisoned between his interrogation, trial, and execution. Once captured by the priests at the Garden of Gethsemane, Jesus was taken to the property of the High Priest Caiaphas, where he was interrogated by him and the Sanhedrin. On the next morning, after further interrogation, Jesus was brought to the Roman governor for trial, at the city’s Preatorium. Sentenced to death, Jesus was then taken to the site of execution, the Golgotha, where he was executed by crucifixion. Five different sites across Jerusalem claim to be where Jesus was imprisoned during these events.

On the eastern slopes of Mount Zion the church of Petrus in Gallicentu is by Catholic tradition the location of Caiaphas’ mansion. Her he interrogated Jesus, while Peter denied knowing him (Mat. 26:69-75). The site does contain features of a first century mansion, and at the lowest level is a cistern. Crosses engraved in the mouth of the cistern led the Catholic church to claim a centuries old Christian tradition that Jesus was placed in this cistern the night before he was handed to the Romans.

The Armenian Christians believe the estate of Caiaphas was on the top of Mount Zion, and for decades working on completing a big church at the site. Archaeological excavations carried out in the 1970’s provided archaeological support to the claim of a large estate at this property some 2,000 years. Nevertheless, the Armenians point to a small room in a medieval chapel near the uncompleted church as the site of Jesus’ imprisonment.

Moreover, the Armenians point to another prison where Jesus was held, when brought to the house of Annas, the Uncle of Caiaphas. This is attested only in the Gospel of John (John 18:13-23). The “cell” is within a mediaeval church called the Church of the Archangels. 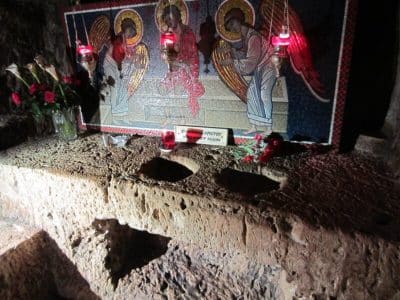 A 4th location claiming to be a prison of Jesus is located along the “Stations of the Cross” (Via Dolorosa), between the 2nd and the 3rd stations. The complex is called The of Holy Monastery of the Praetorium, suggesting it is where Jesus was trialed by Pilatus. A set of caves under the building are presented to pilgrims as a local detention facility. The smallest cave in this group is said to be where Jesus was imprisoned. A flagstone with two holes suggests he was shackled in his legs here, while seated over the stone.

Prison of Christ next to the Golgotha?

A 5th site is in the Church of the Holy Sepulchre. Aside the Golgotha and the Tomb of Jesus, the church bears several chapels that mark additional sacred events and / or objects by a local tradition. The Stone of Anointing or Stone of Unction marks where the Jesus’ body was washed and prepared for burial. The Chapel of the finding of the cross marks where a piece of the cross was found, and so one. Among others, a chapel in the north wing of the church is, again – by local tradition, where Jesus was fettered in his legs while his cross was prepared. Here too a flagstone with two holes is presented to the public as where Jesus was shackled. In 2019 the chapel underwent a restoration project.

Visiting the Prison of Christ Sites

Peter in Gallicantu and the Holy Sepulchre are open for visits on daily basis. The Greek-Orthodox Monastery of the Praetorium is usually open, but not on daily basis. The Church of Archangles is within a private area in the Armenian Quarter. Visiting it requires a permission. The Armenian Caiaphas Church is closed to the public, but if needed a special permit to visit it can be arranged.

To visit any of these sites, and other highlights of Jerusalem, it is recommended to combine it in a guided day tour of Jerusalem.