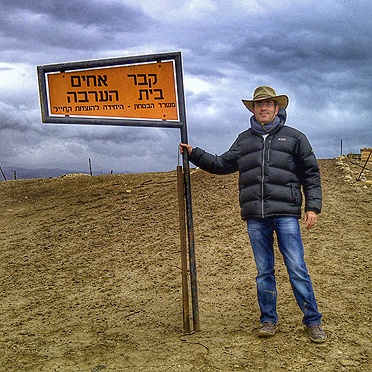 During the British Mandate Period Jewish entrepreneur Moshe Novomeysky researched the Dead Sea and developed the Palestine Potash Company. In 1939 a Jewish communal farm (Kibbutz) was established next to the plant. It was named after Beit-Haaravah (Joshua 18:22), a Biblical site whose remains lie next to the Monastery of Saint Gerasimos. Being isolated, during the 1948 Israeli-Arab war, its 200 residents were cleared by 17 boats to Sodom, in the southern end of the Dead Sea. The Jordanians destroyed the remains of the village, and today only its small cemetery is still visible. Next to its ruins, the Jordanians built in the 1950s a bridge over the Jordan River. It was named after king Abdullah I, Jordan’s monarch until 1951. During the Six Day War, in 1967, a section of the bridge was destroyed to avoid Jordanian attacks on Israel. It was left unusable ever since, and crossing the river is possible at the nearby Allenby Bridge. In 1980 a new village by the name Beit Ha’aravah was established 3 miles west of the historical site. Israelis are very familiar of a song by Shmulik Kraus presenting his father’s memories of the old kibbutz.

The Kibbutz cemetery and Abdullah bridge are 2 miles south of Jesus’ baptismal site. Reaching the sites requires a permit from the Israel army (IDF). These sites present a less known yet fascinating chapter in the history of the State of Israel.

A tour to the site can be combined in a day tour of the Dead Sea.