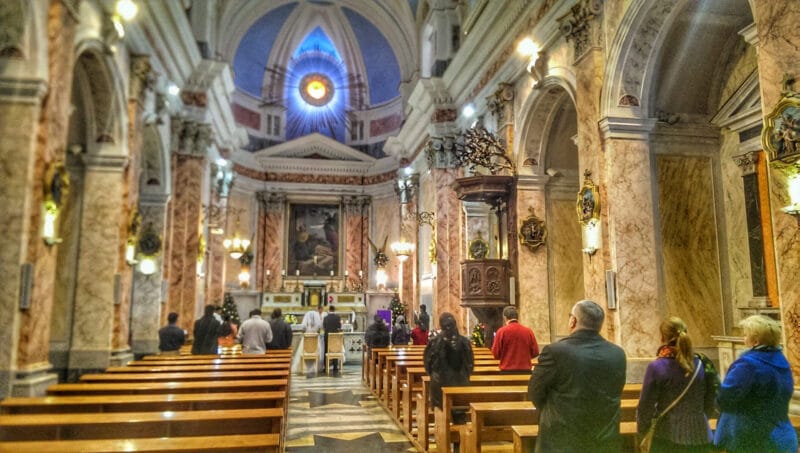 Perched on a hill above the city’s port, Saint Peter church is a distinctive church complex built over Old Jaffa‘s medieval citadel. Named after Saint Peter, the church marks the significant vision if Peter in Jaffa, abolishing Kosher rules.

The Book of Acts records Jaffa as the place where one of the most significant events in Christian history took place. Acts chapter 10 records Peter receiving instructions by an angel to eat unclean animals:

9 About noon the following day as they were on their journey and approaching the city, Peter went up on the roof to pray. 10 He became hungry and wanted something to eat, and while the meal was being prepared, he fell into a trance. 11 He saw heaven opened and something like a large sheet being let down to earth by its four corners. 12 It contained all kinds of four-footed animals, as well as reptiles and birds. 13 Then a voice told him, “Get up, Peter. Kill and eat.” 14 “Surely not, Lord!” Peter replied. “I have never eaten. anything impure or unclean.” 15 The voice spoke to him a second time, “Do not call anything impure that God has made clean.” 16 This happened three times, and immediately the sheet was taken back to heaven. (Acts 10:10-23).

History of the Saint Peter Church

During the Crusaders period Jaffa was well fortified, and it included a citadel on its summit, over the port. Later, the citadel was destroyed, by the Muslims. The Saint Peter church was built in the late 19th century CE over the citadel’s medieval remains and subsequent churches. Completed in 1894, the church was sponsored by the Spain and so, its façade resembles contemporary Spanish churches from Latin America. Its Baroque style interior includes various scenes from the life of Peter, as well as images of Spanish saints. Unlike most churches, Saint Peter’s church in Jaffa faces west, towards the sea. This unusual orientation relates to Peter’s vision, that appeared from the sea, and to his subsequent sail to Rome, in the west.

The church is open every day of the week. It serves a small local community and pilgrim groups. Next to the church’s sacristy are two rooms said to be remnants of the Crusaders-era citadel, and where Napoleon stayed after conquering Jaffa in 1799.

Un top of the church’s façade, supporting a bronze cross, is a big rock, brought especially from Caesarea-Philippi. The rock resonated with the event that took place in the vicinity of Caesarea-Philippi (today’s Banias), in which Jesus titled his favorite disciple – Peter, “And I tell you that you are Peter, and on this rock, I will build my church..”(Matthew 16:17). In the Greek version of the story there is a play of words, as Petrus, in Greek, means Rock.  Being so, the rock on top of the church symbolizes both Peter, and his solid faith of Jesus.

A tour of Saint Peter’s Church in Jaffa can be combined with a guided day tour to Jaffa and Tel-Aviv.