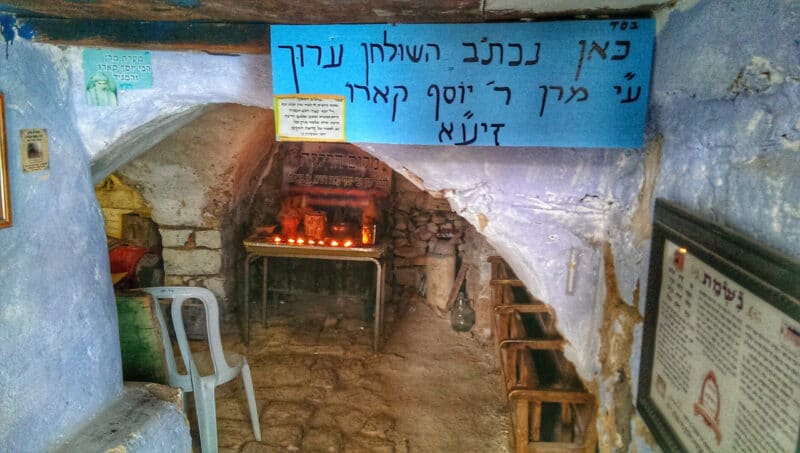 Set in the heart of Tsfat’s old city, the Yosef Karo synagogue is said to be built where in the 16th century Rabbi Yosef Karo wrote his monumental book, ‘Shulchan Aruch’. Today, this humble sized synagogue, with its special interior and old library is a popular tour attraction. 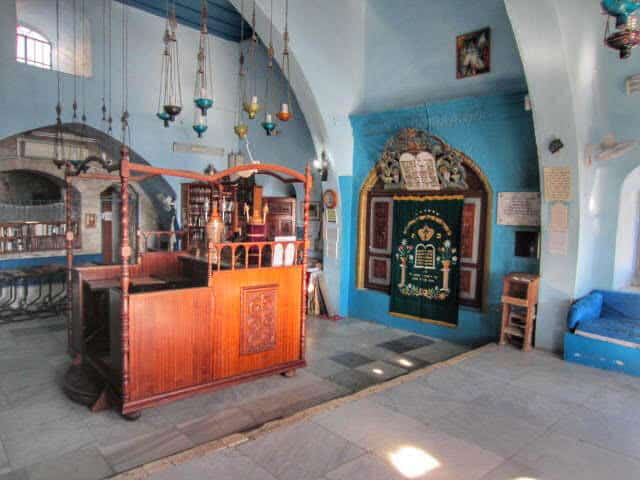 Following the Jewish expulsion from Spain, many Jews fled to the east. Some even settled in Israel, although it was undeveloped under Ottoman rule. Yoseph Karo, who was born in Toledo, eventually settled in Safed/Tsfat, in Israel’s Upper Galilee. He was ordained as a Rabbi, and then devoted 32 years to compile all Jewish Laws (‘Halacha’). Fearing what the Spanish inquisition and Jewish expulsion could do Jewish tradition and faith, he set to compile all ‘Halachot’, and conclude the best way to adhere them. The shorter version of his monumental work, ‘Shulchan Aruch’ (from Hebrew: ‘Set Table’), was accepted by all Jewish communities. It enabled Jews to follow the ‘Halacha’ even in the absence of sufficient local Rabbinical scholarship, and so reunited the Jewish world after the trauma of the Spanish expulsion.  Furthermore, to this day, ‘Shulchan Aruch’ is the accepted text for Jewish law among all orthodox communities, with many commentaries written about it. Karo himself developed a high reputation, and was Safed’s chief Rabbi until his death in 1575, at the age of 87.

By local tradition, Karo lived beneath the synagogue while compiling the ‘Halachot’ and was often visited by an angelic figure called ‘Hamagid’. Dialoguing with him in Aramaic, Karo published these visions in a separate book called ‘Magid Meisharim’. This book alludes to Safed’s reputation as a Kabbalah center at that time.

Both the Yosef Karo synagogue and his single-room house are open for visits during the week. On Sabbath the synagogue runs Sepharadic-style prayers, and it is especially known for its kabbalat Sabbath in the summer. The current synagogue dates to 1839 and was built after the earthquake of 1837. It has a Sepharadic design, characterized by the seats set around the Bimah and the walls painted in color colors.  The Holy ark presents 3 Torah scrolls. The oldest is said to be 500 years old and coming from Spain.  In the synagogue’s back wall is its old library, with some books that are centuries old. Tourists are to dress modestly when visiting the synagogue, and men are expected to cover their head. It is also costumery to leave a small donation in the synagogue’s charity box.

A visit to Yoseph Karo synagogue and Safed can be combined with a day tour in the north.

Contact us to inquire more about a private tour to Safed: