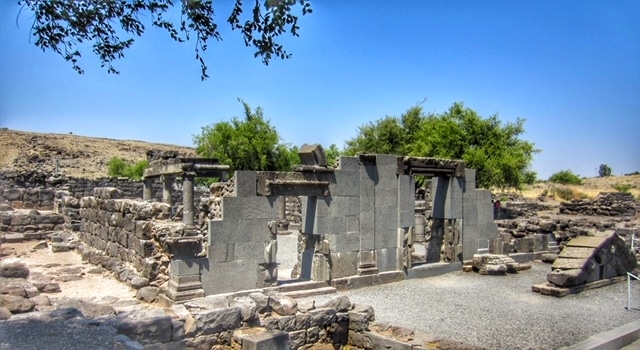 Chorazin (spelled also: Chorazim) is an ancient village set on a hilltop overlooking the Sea of Galilee, about 2 miles north of Capernaum. In Christianity the site is mostly known for being doomed by Jesus, apparently because of its people rejecting him. Today, Chorazin is an archaeological site, known especially for its well-preserved synagogue from Talmudic times.

History and Archaeology of Chorazin

Chorazin was settled in the first century and is mentioned also in the New Testament. Yet, apparently Jesus was rejcted by the Jews of Chorazin, and in returned he cursed it, together with Bethsaidah and even Capernaum, where he lived:

“Woe to you, Korazin! Woe to you, Bethsaida! For if the miracles that were performed in you had been performed in Tyre and Sidon, they would have repented long ago, sitting in sackcloth and ashes. But it will be more bearable for Tyre and Sidon at the judgment than for you. And you, Capernaum, will you be lifted up to the skies? No, you will go down to the depths”. (Luke 10:13-16).

Indeed, 3 centuries later Church father Eusebius states that Chorazin is a “ruined village”. Yet the Talmud, and archaeology, indicate the site was inhabited throughout the Byzantine period. The Babylonian Talmud praises the grains of Chorazin, and the lavishly built synagogue found at the site indicates Chorazin prospered. Nevertheless, in the Middle Ages Chorazin was abandoned, and even its location was forgotten. It seems the Jesus’ damming the village to be obliterated had its effect.

In 1738 the English geographer R. Pococke was the first to suggest identifying ancient Chorazin at Khirbet Karaze, a site of ruins on a hill north of Capernaum. Only in the 1980s the site was finally excavated, on behalf of the state of Israel. The excavations unearthed several houses, alleys formed between them, Jewish ritual baths (Miqvaot), water channels, cisterns, and olive presses. In the heart of the village, the expedition uncovered the ancient village’s synagogue. It was built of local black basalt stone and proved to bear many bas-reliefs. Surprisingly, the decorations included even figurative art, despite the second commandment that forbids it. Next to the entrance, an ornamented basalt seat was identified as “Moses’ seat”, a common element in ancient and modern synagogues. “Moses’ seat” is also mentioned in the Gospels in Matthew 23:1. A Hebrew inscription engraved on its base was dedicating the seat to “Yodan son of Yishmael” in reward for “making this stoa and its staircase, at his expense”.

Chorazin is a National park and is open every day of the week. The visible finds all date to the Byzantine period, yet they reflect well Jewish rural life around the Sea of Galilee in antiquity. The site also provided stunning panoramas of the Sea of Galilee, the Galilee, and the Golan Heights.

A tour to Chorazin can be combined with a guided day tour of the Galilee.

Contact us to inquire more about a private tour to Chorazin: